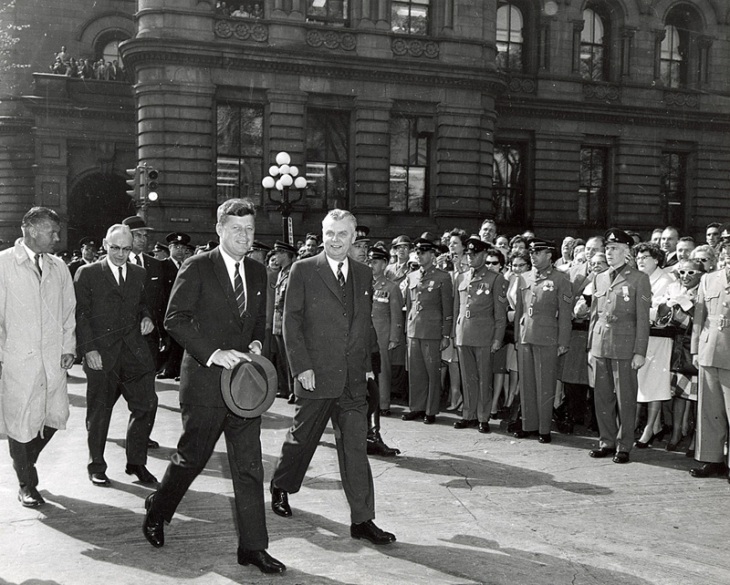 A FEW DAYS to the weekend’s Liberal policy convention, I had a conversation with the former deputy prime minister of Canada at his Ottawa home. Most of it a trip down memory lane (Herb Gray, now 80, holds the record for longest-serving Canadian MP and has a long lane indeed), we covered topics ranging from Indian residential schools to the Polish city of Lublin, only at the end turning our attention to the future of the Liberal party of Canada.

Mr. Gray, who was recently in hospital and looking frail, would have none of this “returning from the wilderness” nonsense. In his estimation the Liberal Party is resilient and vital, and is doing and will do just fine. He told me what everyone now knows, and in any case might well have guessed, that he would be endorsing Sheila Copps’ bid for party president. When I cited last year’s election results, he batted this away and pointed out — and I had to concede — that Liberal leader Bob Rae is the de facto Leader of the Opposition. He may even become the permanent leader, this elder of the Liberal establishment observed in passing.

The names Bob Rae, Sheila Copps, and Herb Gray place us inevitably on memory’s footpaths.  Those now aiming at positions of leadership were in many cases doing so over a full generation ago, and whatever one’s assessment of Copps and Rae it is undeniably the case that they may boast the glorious future which is behind them, even should there remain a bit more of it ahead. My initial impression of Mr. Gray was also, curiously enough, my impression of the Liberal leader when I last saw him in person and up close (this was at a rally for the missing and murdered women): time is catching up. I still have within me the vivid image of the nerdy Bob Rae, slim and agile and a face all of spectacles. Today he is puffy and lumpy and worn-out looking, a pillow that’s been too long re-fluffed and pressed into another year’s service. Then again, his campaign was an impossibility in 1990, his premiership a thing one could not quite believe even as it was launching before the eyes.

The glorious past of the federal Liberal party has been an asset and a burden almost from the beginning. Liberal hubris, manifesting as a stubborn attachment to failing ideas, brought down William Lyon Mackenzie King in 1930. The resulting majority of Richard Bennett was in some respects a burst (though short lived) of creativity and renewal for the Conservative party, which amidst the Depression established a number of Canada’s crown corporations — the CBC being one of them. In 1958, the baggage cart toppled once again: this time upon Lester Pearson, to whom the hugely, and uniquely, successful Progressive Conservative leader John Diefenbaker first applied the arrogance label which has stuck to this day. The Liberal party has been brought down over and again, by momentary winds of chance and by perennial factors such as the whims of Quebec and Prairie discontent.

The preceding does suggest, as Mark Twain once remarked, that rumours of death are an exaggeration. Another omnipresent trope is of “facing forward,” the charge that Liberals lack a vision of the way ahead and are therefore at a disadvantage in the work of charming voters. Again, however, the history of the party offers support to the idea that one need only rebuild the finances, polish up a leader, ride out the weather, and recapture the political centre at the auspicious moment. (And, along the way, appropriate the most expedient ideas of rivals.) The competition between Sheila Copps and Mike Crawley concerns this very matter, and it is the case that when you speak to party members with a long memory you often will detect on them an insouciance, an inner certainty that everything is fine — that “we’ve been here before” and must pay no heed to rabble rousers and their falling skies.

By some accounts this unshaken and unshakeable certainty is only the arrogance of the Liberal party. Yet at each bringing down there soon enough followed a rising up, as people like Herb Gray are well aware. The governments which supplanted the Liberals cultivated an arrogance of their own and busied themselves in acquiring the life lessons of failure. By 1935 Bennett was a discredited and derided leader, and within a few short years the ground was crumbling beneath the political feet of Diefenbaker, widely perceived as a ditherer and abandoned by Quebec and many in his own cabinet. One can not fail to perceive the applicability of these happenings to current affairs, and, if one is a Liberal, to derive from them a degree of comfort. The sun sets, and the sun rises, and as the legend of King Arthur so too the legend seemingly embraced by many in the Liberal party of Canada, a story of once and future glory.