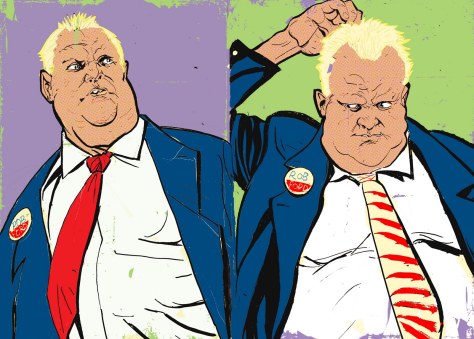 HERE’S A USEFUL piece of reporting for your consideration. It was written by Renata D’Aliesio and published in the March 13, 2014 edition of the Globe and Mail, under the headline “Ford knew of football coach’s criminal past, court documents show”:

Rob Ford penned a character reference for his assistant football coach’s sentencing for dangerous driving and assaulting a police officer, court documents reveal, marking at least the third time he has written a letter of support for a convict while in public office. The letter, composed on behalf of Payman Aboodowleh in 2009, confirms Mr. Ford knew of the volunteer coach’s violent history when he invited him to work with high-school athletes. As with his other letters, Mr. Ford’s acclamation of Mr. Aboodowleh was written on official City of Toronto stationery, sparking concern from a veteran Ontario Court judge who questioned whether the then-councillor may have misused his position of authority.

Let’s pause a moment. Read that passage again, this time slowly. It says at least three times Rob Ford has supported a convict. Did you get that? That’s not the Star saying this, it’s the courts.

Support is a weak term, a euphemism. What Rob Ford has done “at least three times” is actively recruited convicts. He’s brought them into his inner circle, and he’s put them on the city payroll, and he’s completely pissed all over every notion and standard of conflict of interest and the integrity of public office. He’s worked with these convicts by day (insofar as he works), and at night he’s gone out with them to places like Steak Queen, where together they collaborate on YouTube videos. And he’s done this recently, too.

Now imagine that you know a guy who has a bunch of good friends. Through a series of accidents, the fact surfaces that all the friends of this guy are really into something. It could be a band or a kind of dancing or a sport. Whatever it is, imagine it’s something a guy wouldn’t normally want to admit. Let’s say you’ve found out that all the friends of the guy you know love to get together on the weekend to listen to Jane Siberry.

The guy that you know says, No way, I’ve never listened to a Jane Siberry album. Do you believe him, when you know who he’s spending his weekends with? At the very least you ought to suspect he’s a closeted Jane Siberry fan. (Apologies to all the Jane Siberry fans for this analogy.)

Think about all the thugs, abusers of women and convicted criminals closely associated with Rob Ford. Think about how Doug speaks. For him, politics is breaking kneecaps and beating your opponents until they fall bloodied to the ground. When Olivia Chow announced she was running for the office of mayor, Doug Ford went all Mel Gibson and said it was going to be like the scene in Braveheart where the warriors come over the hill for the attack. Go watch that movie and think about what might be going on in Doug Ford’s neanderthal brain. I’m 100% serious. Actually do it, then come back.

There’s credible reason to suspect Rob Ford ordered a prison hit on his sister’s former partner (the charming guy who killed her subsequent partner). That could well be the subject of one of the YouTube videos, where Rob is giving a drunken performance of a beat-down. And while we’re on the topic, think about the Ford siblings and their lives of drug addiction and crime. The Ford family has had more than its share of murder, death and violence. Their world looks to me like a dark, ugly and tormented place.

“Oh, but Rob Ford keeps taxes low! Dougie is a great guy! Sure, the mayor smoked a little crack and likes to have a drink on the weekend, but at least his vices and crimes are private and only hurt himself.” This is how almost 40% of the committed GTA electorate see Rob Ford – and they’ve had years to reconsider this. Nothing will turn them against Rob Ford now, except maybe if he starts funding downtown social programs for trans-gendered youth and shows up at Pride parades, waving a rainbow flag.

Here’s what I think – and you should be thinking it too. The Ford brothers have been “listening to” a lot of “Jane Siberry.” By listening to I mean engaging in, and by Jane Siberry I mean crime. I suspect that the reason so many of Rob Ford’s friends belong to the criminal elements of society is that Rob belongs to that element too, and has since his youth. And I am willing to bet that we only know about 10% of what he’s up to – not just been up to: up to right now.

Rob and Doug Ford are bottled rage, plain and simple. I agree with Rob Ford’s supporters that he is self-destructive. (Doug, not so much. He’s plain old destructive.) How that makes him a better candidate for mayor than, say, Olivia Chow is beyond my depth. If you think that Lowtax Raging Drunken Stuporman trumps a liberal (and you do, Ford Nation), then I guess that’s what you’ll choose. But you should understand that decision better than you apparently do.

The Fords are not everyday joes, they are up-to-no-good joes. They are unique in politics, to be sure, but for all the wrong reasons. Rob Ford is the subject of several police investigations. Are you? Both his personal and professional lives are the subject of the courts. How about you? The mayor’s closest aides, associates and friends threaten and attack women, engage in drug turf wars and – in the case of the lowlife Sandro Lisi – use the deliberate spreading of bedbugs as a terror tactic. Hows about y’alls, Ford Nation? If you still think Rob Ford is one of you on account of his drinking of Molson Canadian, and if you think a little crack is the extent of Rob Ford’s involvement with naughty behaviour, you’re a total idiot, and you shouldn’t be allowed to vote.

Addendum (15 March): Many thousands of people have now read this article, and I’ve got email, almost all of it about Jane Siberry. Thanks for reading and commenting and tweeting. Maybe I’ll write a Jane Siberry post, or encourage her to run for Mayor of Toronto. I’d even consider voting for her. Cheers.

16 thoughts on “Rob Ford and the Criminals, continued”