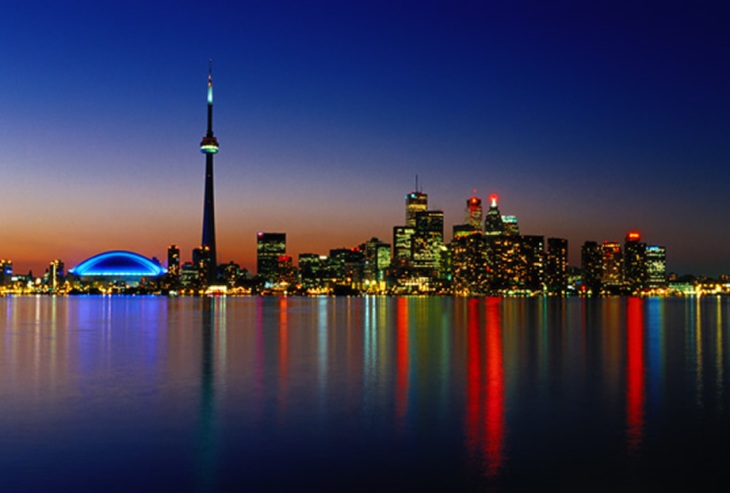 I‘M AWARE THAT my readers come from all over the world (thank-you for that) and that you’re not a parochial bunch. And so I beg excuse for the opportunity I’m going to take today to praise the city in which I live: Toronto.

Many of you have been hearing, much more than is usual, about the mayor of Canada’s largest city, Rob Ford. No doubt you’re curious to know how a man of such erratic and unserious character could have become, and for so long remained, a holder of the city’s highest political office. It’s neither my purpose nor desire to answer that question here, but if you read between the lines you may get a better understanding of these matters. Keep in mind that my second choice of title for this essay was “[In Spite of Ford Nation] Toronto is Great.” This is going to be a positive, upbeat, celebratory essay, but only because we need to remind ourselves that, indeed, Toronto is Great.

First, an anecdote. Like many in Canada, I grew up in a small town. My home town of Fort Erie was at the end of a highway, and Toronto was at the other end. I spent my youth dreaming of the day I would escape into a larger, more vital world, and there were many times as I crossed the Central Avenue bridge I looked west along the Queen Elizabeth Way and contemplated the future and Toronto. As life and its accidents would have it, over twenty-five years would pass before I moved, in 2012, to a neighbourhood I had been making preparations for in 1985.

The city has changed a great deal since my high school days, but all the things that attracted me then attract me now. Toronto throbs with life and opportunity and optimism. There is endless diversion, innovation, culture, entertainment and aspiration. On any corner, you’ll hear the languages of the world being spoken, and the people who have come from every nook of the global village have brought with them their food, their music and their art. Whatever you’re into, and no matter which way you’re bent, you’ll find your people in Toronto. I love this city, and many are the times I’ve stopped in my tracks to reflect on how glad I am to live here.

The city has critical mass, meaning that it’s now so big that you can live a village existence anywhere in the downtown core. Toronto is, like New York, a network of self-contained villages. I live on the main east-west transit line, so it’s no problem for me to get anywhere in the city. But if I choose I can also stay in my own little village, because everything I need is right there. The town I grew up in was not structured this way at all, and neither are most towns and cities. In my home town you need a car for everything, even if it’s just getting some milk from the “corner store” several miles down the road. I’ve made walking a big part of my life, and the combination of an interesting city and a good walk is something I want in my daily life. Toronto is one of the world’s great walking cities.

I have a mass transit system behind my apartment, and a massive forest in front. How many people can say that? If I want to feel like I’m in the country, no problem. High Park is right there. If I want big city convenience, no problem. The Bloor-Danforth line is also under two minutes away. Whatever else I want, Toronto has it in abundance.

The reason I want to remind people that Toronto is great is worth mentioning. A few years ago some folks here in the city began talking as if Toronto had been overtaken by rampant and boundless corruption and dysfunction. Listening to them, you might have concluded that Toronto was a terrible place to live – a place of soaring and excessive taxes, poor services, waste and fraud. A place where the government took all of your hard-earned money to gave it to layabouts, while allowing the city to fall to pieces.

Now, there is some truth to this depiction. Toronto politicians of recent years have behaved in an imperious way. Like all politicians, they are not above conducting themselves in the style of spoiled children. They have made both good and bad decisions. Nor is Rob Ford the first “flamboyant” politician we’ve had. (I expect he won’t be the last, either.) As for the city falling apart, if you’ve walked around the Gardiner Expressway lately, you know that it is indeed coming to pieces. But as bad as Toronto’s problems are, or seem to be, they’re nothing compared to the problems of North America’s other large cities. Seriously: would you, Toronto, rather have Montreal’s infrastructure problems or Chicago’s crime or Detroit’s finances? Would you trade your city’s problems for the problems of any other large North American city? If you’re smart and informed, your answer has to be “no way.”

You see, Toronto is objectively in great shape. The municipal property taxes are low by continental standards. The services are good. The city is well run and well managed. The biggest problem I see is the people who talk trash about our city and who think of municipal politics as nothing more than a big gravy train that has to be stopped, at any cost. They elected a mayor who promised to say No to everything that government does, and that’s been his game plan ever since. Rob Ford is a trained monkey who sees a budget line item and votes No. And as long as he keeps being that monkey, his supporters will grant him a pass for anything else that he does or doesn’t do.

People wonder why I am not nice to Ford Nation. I’ll tell you why. Ford Nation hates the downtown, and they elected Rob Ford as part of their dirty little war against the city’s core. This goes back to the days of Mike Harris, when Toronto was re-structured in a way that brought the suburbs into the city and allowed conservative voters in Scarborough and North York and Etobicoke to overwhelm the historically liberal downtown voters. Harris did this all over Ontario, and it’s worked pretty well. Since the waves of amalgamation in the 1990s, I’ve lived in Kingston, Ottawa and Toronto – and in every one of these cities since then I have been living a Groundhog Day, in which buffoons like Larry O’Brien get elected to make war against the “elites.” Do I sound pissed? I hope so, because after fifteen years of living and re-living this, I am.

The thing is, these Ford types of bozo politicians always go after the very things that make cities livable and interesting and great. People don’t come from all over the world to visit the Scarborough Film Festival. They don’t want to ride to the top of the North York Tower, or catch an Etobicoke Blue Jays game. Toronto, my friends, is the downtown core. That’s where all the fun is. And yet Rob Ford’s people hate the downtown and everything it represents. Since Ford became mayor, he’s been all about cutting downtown services and investments (aka “gravy”) and instead building a subway to Scarborough. The suburban Ford voter is only interested in two things: big fat roads in and out of the downtown and lower taxes. What a grand vision for our city.

Oh, sure, the suburbs are great too: the houses are big and there’s lawn and a garage large enough for three cars. I understand why people want and like these things, and they should be free to have them. People’s personal decisions are none of my business. What is my business is the future of this city – and so I’m getting tired of people who misrepresent life here, in order to advance a political agenda that is quite hostile towards everything I value. I get that you love the suburbs and you wish you could just be rid of us downtown elites. But here’s the thing you need to know: it was you, Ford Nation people, who put Mike Harris in power, and you who are ultimately responsible for the GTA. Harris got your vote for exactly the same reasons Ford did, and like Harris, Ford is screwing you and your future by making decisions based on the narrowest of political visions.

One day you’ll learn to hate the results, but I take no comfort in that, because like you always do you’ll just blame people like me.