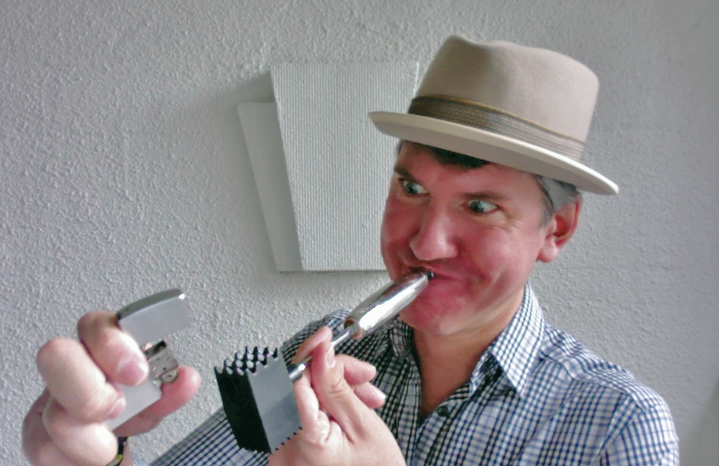 OH, LORDY, THE OLDEN days. Gather round, kids: grandpa is going to tell you allaboutsem.

The moving pictures. They were all black-and-white, just how we liked ’em. Take Humphrey Bogart. He was strong and smart, and not only did he know what was right, he did it, too! Every man wanted to be like ol’ Bogart, which is why men wore fedoras and trench coats and spent their time on the Moroccan tarmac, in the fog, waiting for Ingrid Bergman. Yeah, now that you mention it, it does sound creepy.

The olden days! Walking the beach whilst smoking. Lounging in chic restaurants with witty friends, whilst smoking. Putting on your best suit to get on an airplane, and flying to Paris, whilst smoking. Chatting with Dr. Keller in his office, whilst smoking. Which brings me back to Mr. Humphrey Bogart, because everywhere you went in the olden days it was just like the movies, where everyone was forever smoking a cigarette. How cool and sophisticated and manly was that.

Then, about thirty years ago, things started to change. The people on TV started telling us that, actually, cigarettes aren’t so supergood for you after all. In fact, not only are they not supergood, they’re more like, ohIdon’tknow, superbad. Then all of our heroes started to do inconveniently unmanly things, like getting sick from cancer and withering away before our eyes. We realized that, boy oh boy, Rick Blaine probably would have been a whole lot less sexy if he’d spent Casablanca coughing up loogie and pushing around one of those wheelie poles with the heparin drip bag on it.

Pretty soon the surgeons were cutting down to, like, a-pack-a-month in the operating room. When you went to the restaurant, the hostess would ask “smoking or non-smoking,” and you’d say “oh, wherever there’s room,” because second-hand smoke wasn’t a thing yet and anyways who has time to wait for their spaghetti al pomodoro?

Within a few years smoking was illegal pretty much everywhere, and that was the end of that.

See how clever this idea is? It’s like Bob Dylan in 1965, but in reverse, when folk music went from acoustic to electric, and everyone thought that acoustic was the thing and that electric was terrible.

I’m not sure how an e-cigarette works exactly, but from what I’ve observed it’s something like the following.

First you take a twenty-something-year-old dude, and you dress him entirely in Jack & Jones (this part is really important). Then you give him a little too much to drink—PBR, obviously—and you put him on the Bloor-Danforth line with a few of his way-too-confident friends, who have also had a bit too much to drink. Then out of their pockets come these little metal tubes with liquid in them. They suck on the tubes and a battery-powered heating element vaporizes the liquid, producing a mist of propylene glycol, glycerin, and nicotine (yummy!), and when they blow that mist out, it forms a little cloud that looks a lot like cigarette smoke but which quickly dissipates and has no smell. So that makes it a-okay, I guess is the thinking.

Call me old-fashioned, but it seems to me that, for all their undeniable downsides (smell, yellow teeth, nasty cancer death), acoustic cigarettes at least had a coolness factor about them. You can’t deny it. There was a time when almost everyone smoked, and like it or not that reason is because acoustic cigarettes looked really cool. To smoke an acoustic cigarette was to be independent, rebellious, and edgy. Sure, in the end it was revealed to have all been the big lie of greedy Fortune 500 corporations, but they never could have gotten away with the lie for so long if there hadn’t been something to it. And they’re still getting away with it, in places—like China—where smoking is a big thing.

As for the e-cigarette—well, to my way of thinking at least, it doesn’t have any of the back-in-the-day coolness factor at all. I always get Trekkies and Trekkers confused, so I don’t know which word to use, but it’s the more nerdy term I’m reaching for. Because an e-cigarette makes you look like you have some Star Trek disease from the future, and that Bones gave you that thing to suck on until you get better. Out in the world with your Gene Roddenberry stick, you project the total opposite of the classic attitude with which smoking was long associated. Today, a committed smoker is pretty much declaring “screw you, I’m embracing social censure and a brutal cancer death, and I don’t care what you think,” while an e-cigarette smoker, in contrast, is saying “I deserve the best organic cherry-banana amber leaf fruit vape that money can buy while I listen to Amanda Palmer on my Sharper Image hands-free bluetooth headset.” Sorry, but not cool.

Here in Toronto there are stores now that sell nothing but e-cigarettes. I wonder if these are going to catch on, and then I realize that they are such a bad idea and that bad ideas always catch on. How long before there are ten people on the subway at any given time smoking an e-cigarette, and then twenty, and fifty? Will we repeat the past, what with e-smoking and e-non-smoking e-sections in the e-restaurant? I hope not, but I’m a bit of an e-pessimist. Then there’s the whole question of the health risks. I’ve read that e-cigarettes are “better” for you than the traditional kind, but then again I’ve also read that the moon landings were faked, that Elvis is still alive, and that Stephen Harper is a great Prime Minister. All I know for certain is that I’m not looking forward to seeing hipsters, everywhere I go, blowing cinnamon nut, cocoa and cloves banana bread mist out of a battery operated piccolo.