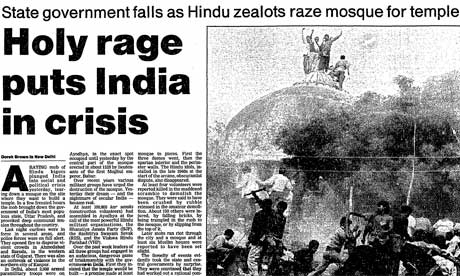 WHEN KARAN JOHAR’S excellent film, My Name Is Khan, was released worldwide this past January, the Hindu right-wing nationalist group Shiv Sena attempted a disgraceful and ultimately failed boycott. At the centre of this meddling was the film’s lead actor and owner of the Kolkata Knight Riders, Shahrukh Khan, who had recently said “Mumbai belongs to all Indians” and had supported the inclusion of Pakistani cricketers on the eight teams of the Indian Premier League. Due however to the IPL’s fears that Visas would be denied following the 2008 Mumbai terrorist attacks (the work of SIMI and Lashkar-e-Toiba, who today jointly operate as Indian Mujahideen), no Pakistani cricket players were chosen.

The juxtaposition of Shiv Sena and My Name Is Khan provides a kind of summary of one’s options, both in the immediate case of the so-called “Ayodhya dispute” as well as in the larger consideration of religious cohabitation, from Mumbai to New York. As I write this, the Lucknow verdict is in the future, having been postponed from September 24 to 30. Calls for further postponement of the court’s decision, to avoid the anticipated violent response whether of Hindu or Muslim groups, have thus far been ignored. In Uttar Pradesh officials have prepared for the worst, as they must, conducting searches in predominantly Hindu Ayodhya and Muslim Faizabad, and deploying police armed with tear gas shells and rubber bullets. According to a report from the Times of India, “intelligence units have also been put on high alert to monitor movement and activities of anti-social elements.”

The 125 year-old Ayodhya dispute is a contest in a north-western Indian city of under 50,000, between Muslim and Hindu elements. At the centre of the dispute is the Babri Mosque, destroyed in 1992 by the Sangh Parivar, a group of Hindu nationalists behind whom is the rotten Rashtriya Swayamsevak Sangh, or RSS. (A good analysis of the political manufacturing and exploitation of this mosque controversy, by the Hindu right wing, has been written by Manjari Katju and published as “Vishva Hindu Parishad and Indian Politics.”) The mosque occupied a site which prior to 1528 and the Mughal emperor Babar was the location of a Hindu Ram Janmabhoomi temple. A place of Buddhist, Hindu, Muslim, and Jain significance, Ayodhya has played important roles throughout history, in the ancient Kosala Kindgom and the Bactrian, Mughal, and British Empires. Under the Mughals, the Indian subcontinent was unified and Persianized, later to be integrated as the British Raj. The Babri site was a place of side-by-side Hindu-Muslim worship, until the British partitioned the Mosque property in the mid nineteenth century. It would not be the last time that a Hindu-Muslim partition would facilitate rivalry and warfare. Now, a zero-sum decision be must made on the question of which of two rivals may claim preeminence over a piece of land.

Although broadly overlooked by the world’s news media, the Ayodhya dispute matters. In the West, an era of renewed religious conflict has arrived, announced by the Ground Zero Mosque controversy and the nasty fringe of the Tea Party. India is a modern, secular, multi-ethnic and multi-religious democratic state. Its history is much more complex than that of either Canada or the United States, but it faces similar social and political challenges and, as a democratic nation, employs similar methods. Its internal rivalries will unfortunately be familiar, even more so in the very near future. This is why My Name Is Khan is able to transpose its theme of religious-based hatred from Borivali to Banville, a fictional city modelled after Danville, San Francisco.

In the movie, Rizwan Khan is a Mumbai-born Muslim with Asperger’s syndrome. He moves to America and there meets and marries a Hindu woman, Mandira, who has a young son. The son is killed by a group of Muslim-hating boys, and following the breakdown of his marriage, Khan undertakes an improbable journey to meet the US President to tell him, “My name is Khan, and I am not a terrorist.” Along the way, My Name Is Khan examines hatred in both America and India, and portrays the domestic abuses of the post 9/11 war against terrorism. The core message of the film is articulated by Rizwan’s mother, who, against the inflammatory rhetoric of Muslim versus Hindu, teaches her son that people can be divided only into those who do good things and those who do bad.

A simple message, but one we may have ready as the verdict of the Allahabad High Court arrives.