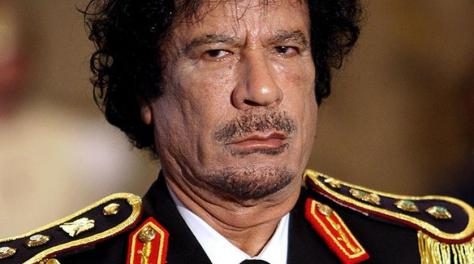 If you are at or under the age of forty-two, Moammar Gaddafi has presided over Libya the full span of your life. This factoid must certainly describe the majority of Libyans, most of whom have never known of life under another dispensation, let alone had the opportunity to chose something or even just someone different.

It is demoralizing to contemplate the fact that Gaddafi was a Saddam Hussein figure within Western geopolitics even before Saddam Hussein was, and that as long ago as the Reagan administration his regime was considered too dangerous to leave unchallenged. The longevity of his rule — the world’s longest, if one puts aside monarchies — is to me a mystery. Partly I suspect his dirty works were eclipsed by the collapse of Communism and the emergence of George H. W. Bush’s New World Order. By the time the Ba’athist regime had reneged on its tacit arrangement with the United States, to provide regional stability and a client-state check against Iran, Gaddafi had ossified into the Madman cliché by which he is still generally apprehended.

The implausible irony, as it would have been from the vantage point of 1990, is that almost just in time for this week’s crowning savagery of his corrupt and superannuated rule, Gaddafi’s sins had been mostly forgiven. He contributed to a victim compensation scheme and voluntarily disclosed and handed over to the Americans his weapons of mass destruction, perhaps desiring to avoid the fate of his principal challenger for the self-proclaimed leadership of the Arab world. The sanctions deriving from Libyan support for acts of terrorism worldwide were in recent years lifted, in the case of the US by the George W. Bush administration, and Libyan relations with the world community and in particular with British Petroleum were “normalized.” The man who had early on taken to a weird cult of personality busied himself with the two-front campaign of Pan-Africanism and Pan-Arabism, proclaiming himself in one direction the King of the Kings of Africa while projecting in the other his bizarre proselytization seminars to the captive audiences purchased through Italian modelling agencies. When in Rome, do as the Green Book says.

Now after forty-two years it looks that the strongman, or madman if you prefer, is about to be brought down by the Great Socialist People’s Libyan Arab Jamahiriya. Gaddafi cultivated over the decades the fiction of a Libyan Islamic grassroots radical social democracy, a thing he regarded as so unparalleled in the world that even the name for it (Jamahiriya) had to be invented. But the claim that there was something new about his rule was simply another instance of his political theatre. His renouncing of honorific titles, the deference to “popular committees,” and the affectation of leftist and anti-imperialist political radicalism, as well as his cant of African unity, could not and did not disguise the brutal and self-serving nature of his reign. The man lasted far too long for anyone’s good, and good riddance to him.