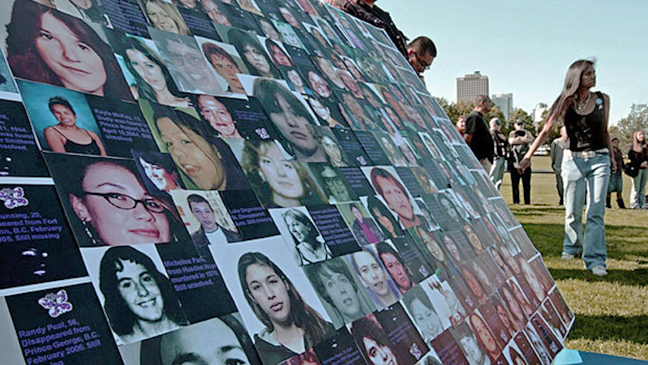 THAT LONG STRIP of the Trans-Canada highway connecting Prince Rupert to Prince George was already well established as a “Highway of Tears” when I drove it in the Summer of 1999, weeks before I moved to Ottawa. Deena Lynn Braem was shortly thereafter added to the list of women, many of them Aboriginal, disappeared and murdered amidst the generalized indifference of Canadians. The trial a few years back of pig-farmer and sexual sadist, Robert Pickton, simply reinforced what those of us paying even a speck of attention already knew: that it was entirely reasonable to assume you could abduct, torture, rape, and dispose of Vancouver’s street women and get away with it.

For the same contempible reasons that Pickton so long evaded even mere suspicion, Aboriginal girls and women continue to disappear from communities large and small across Canada. At a ceremony today on Parliament Hill, the assembled crowd heard from the mother of missing Kitigan Zibi First Nation member Maisy Odjick, who along with her seventeen year-old friend Shannon Alexander went missing from Maniwaki, in Quebec, around September 6, 2008.

As is typically the case, nothing much has since happened. The list of unsolved cases is long and grows; 582 girls and women are murdered or missing, and although there has been an organized and concerted effort to spur the Government of Canada into action, the families of these missing daughters, sisters, and aunts have received little beyond token assurances.

Last year, the Harper Government announced funding “to address violence against Aboriginal women,” but anyone who has looked into the details of the matter has noted the absence of targeted outcomes. The announced federal funds went into a generic RCMP money-pot, while the group leading the public awareness campaign and actually trying to do something about these abductions and murders — Sisters in Spirit — had their missing women funds cut. (A word to the wise: if the Harper Government cites you positively in its propaganda, be very afraid.)

On November 13 of this year, we will observe the forty-year anniversary of the death of Betty Helen Osborne. That evening is given due consideration in the excellent report of Manitoba’s 2001 Aboriginal Justice Inquiry, which concluded that “it is clear that Betty Osborne would not have been killed if she had not been Aboriginal” and that racism, sexism and indifference largely explained the inaction of onlookers as she was beaten to death on a street in The Pas.

With this now before your mental eye, let me connect some dots and note that a Co-Commissioner of the Aboriginal Justice Inquiry, Murray Sinclair, is today the Chair of the Truth and Reconciliation Commission of Canada. That body happened to be in Inuvik last week, and on Canada Day the CBC published an article under the headline, “Residential school survivors: improve mental health care.” In the course of this article, a crisis line volunteer is quoted saying, “We lost hundreds of young people to suicide because there was not enough mental health facilities to respond to their needs.” In other words, death of Aboriginal people and general indifference find themselves once again paired, in the familiar manner.

Both literature and history bear ample witness to the fact that transformation occurs when women rise up. An early and comic acknowledgement of this is registered in Lysistrata; a modern and arguably tragic expression of the principle may be cited in the Petrograd of February 1917, when the Cossacks abandoned the Tsar rather than murder their sisters and mothers. I note also the gesture of solidarity struck today by members of CUPW and CUPE.

The progress of our species, and indeed every individual progressive cause, will be impeded until we commit ourselves to making meaningful progress in the rights, dignity, and empowerment of women. That is the battle being fought all around the world, in places like Afghanistan, and it is the battle here in Canada. And make no mistake: it is a battle.

• What Their Stories Tell Us: Research Findings from the Sisters in Spirit Initiative by the Native Women’s Association of Canada.