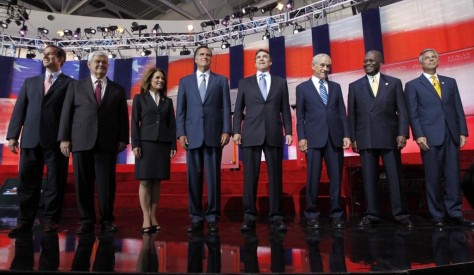 WELL BEFORE THE lapsed acronym RINO (Republican In Name Only) was re-popularized by California Reaganite Celeste Greig, Barry Goldwater had taken on the Rockefeller Republican, energizing a contemporary political trajectory whose crowning achievement was announced on July 27, 1980, by journalist Henry Fairlie:

Just as Americans in general do not have the habits of deference, so the conservative in America does not have them either. Ultimately he does not defer even to the country’s institutions. If one of these institutions, such as the Supreme Court, makes decisions he detests, he will defame that institution. He is as ready as is the common man to bypass the institutions he ought to defend.

In his review of the Fairlie collection, “Bite the Hand That Feeds You,” Jeremy McCarter writes, “When I first read Fairlie’s column about the convention, it seemed overheated. Then I watched Sarah Palin speak. Fairlie’s disgust at the GOP’s impulse toward small-minded demagoguery anticipated the day when it would reach its fullest expression—when the movement would have no farther to fall.” As the 2012 Republican primary hobbles along, one has to wonder how many moderate American conservatives have felt the same. In the past week, Conrad Black has lamented a “corrupt, farcical nominating process” while the conservative New York Times columnist David Brooks observed — on Friday’s PBS program News Hour — that

the debates have become an identity marker. ‘Are you with the team?’ You have to stake out certain pure positions to show that you’re with the Republican team. And so it’s defeated thought and encouraged just ‘I’m totally pure.’

For decades the primary’s ‘identity marker’ trial of fire has threatened to drive out of the party the classical or Red Tory, as well as the Burkean Conservative and the Rockefeller Republican. Balanced budgets and responsible government and negotiated compromises are out, showdowns and political hostage-taking are in. The trajectory of this business, from 1980 to 2012, appears to slope sharply downward. Today it manifests what John Stuart Mill characterized, in his 1859 work On Liberty, ‘the sacrifice of the moral courage of the mind.’ ‘What normal person,’ asked the late Christopher Hitchens — in a 2010 article ‘The Politicians We Deserve’ — ‘would consider risking their career and their family life’ to submit to the farce referenced by Conrad Black? No candidate, Democrat or Republican, will now dare say anything that may run afoul of the most strident among the party base. Thus we have the sorry spectacle of rabble-rousing demagogues and time servers, the more serious and thoughtful candidates either sitting out the campaign or else feigning views which their own careers belie.

William Buckley, the man who had earlier challenged anti-Semitic thugs within the Republican ranks, retaliated to Fairlie by applying to him the insulting label of snobbery. It is a risk one takes in suggesting that the Republican party has abandoned its conservative intellectual roots and principles. Populist attack on Washington Insiders, of late much in evidence, has a hollowness to it when issued by those eager to join the club, or in many cases to iterate their membership. The perception of ideological purity has become so much the ruling concern that a diminishing marginal utility is in evidence. In the race to appear more conservative than all others, Rick Santorum adds the wasted surplus value of an attack, not on abortion, but the largely uncontroversial matter of contraception. A more liberal man such as Romney is left no good option but to dissemble on all importnat points. In the background of the cultural warfare appeal and the striking of postured orthodoxies, one discerns the anxiety over RINO accusations.

One could go on and on at the tedious business of analysis and critique and polemic when really all that is required is the ordinary power of observation. For an unknown number of voters, mere piety and ideological purity are a sufficient endowment for the aspirant to high office. The accepted standard has gotten so low that mistrust attends anyone who would even dare to raise it. America liberated itself from a tyrant king. Shall it now rebel also against the unhindered expression of opinions and ideas?