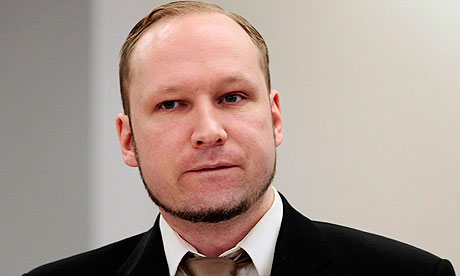 It’s odd that a journalist writing of the Norway murders for the Christian Science Monitor would dwell upon Hindu nationalism while failing to consider the Knight’s Templar, but such was the case in the days following this depraved act of violence:

“Mr. Breivik’s primary goal is to remove Muslims from Europe. But his manifesto invites the possibility for cooperation with Jewish groups in Israel, Buddhists in China, and Hindu nationalist groups in India to contain Islam. … [His] manifesto says he is among 12 ‘knights’ fighting within a dozen regions in Europe and the US, but not India. It’s not known yet whether this group, which he calls the Knights Templar Europe, actually exists.”

Of course, a Knights Templar did exist in Europe — and while in business, they made a name for themselves throughout the Crusades of the Middle Ages. I mention this because Andrew Berwick (or as he is now known, Anders Behring Breivik) begins here also. His 1,500-page “manifesto” bears a Knight’s Templar motto on its frontispiece: “Pauperes commilitones Christi Templique Solomonici,” or “The Poor Fellow-Soldiers of Christ and of the Temple of Solomon.” If you detect the aroma of the secret society in this, allow me to remind you that the Freemasons, historically hostile toward to Christianity, liberally appropriated the symbols of the Knights as well. It’s an old business, this cult stuff.

Having gone through his weird and self-absorbed work, I arrive at two observations. The first is that the man has long marinated in the fetish of fame, and the second is that he represents an extreme manifestation of views which are unfortunately not unfamiliar. The current trial of this paranoid also-known-as is in a sense giving him exactly what he wants — a global platform. This fame has been lamented by survivors such as Tore Sinding Bekkedal, but it should be kept in mind that the regrettable gift is extended under the principle that the other hand will simultaneously take. Here I refer to the fact that this lowlife thug employed murder as a cheap marketing trick, the object of which was to get you and me to pay attention to his message. Yes, he’s been given the audience, which is for him a victory of a sort. However, we were then expected under this arrangement to rally around his ugly cause, rather than denounce it. Today the fact that he is a chained man, rather than the hero he clearly wishes to be, is the only consolation in this depressing and disgusting matter. There was a time crusader and bigots of his stamp might actually lead, and how good for us the pseudo-politics of racial hatred and xenophobia are now so widely discredited.

There is some controversy whether or not Breivik is indeed of sound mind. His acts seem to some too mad to be the product of a rational intelligence. The remarkable thing about his writing however is how tediously ordinary it is in many respects. He includes for instance a Question and Answer section which divulges his sexual interests and (limited) experiences. The last eight pages are awkwardly postured photos. In each case Breivik strikes a note of pathos, apparently absorbed in the notion that everything he is and does is inherently interesting. The effort comes across less as madness than as self-importance further puffed up by his chauvinism.

There are further themes in the manifesto one cannot responsibly ignore. The man is a medieval Holy War nostalgist and a cultural Catholic extremist who admires the awful bigot Serge Trifkovic and who, if he could meet two famous persons, chooses the Pope and Vladimir Putin. (This too is covered in the Q & A.) The Pope is valued as a defender of Christian culture, seen by Breivik as under attack from bolshevism and radical Islam. The choice of Putin derives from similar logic, as well as from the recent Chechen Wars, and it is worth noting here the recent political and cultural resurgence of the Russian Orthodox Catholic Church, an institution deeply invested in the Russian dictator’s fortunes.

The last and certainly least of this trio, Serge Trifkovic, is a Serbian nationalist and a former Radovan Karadzic spokesman. A Republika Srpska hack, ethnic cleansing denier and Muslim hater, Trifkovic is most known (along with Walid Phares) for the development and dissemination of the “taqiyya thesis” — the idea that all Muslims are terrorists bent on world domination, required by their religion to lie about this essential fact. Today his tribal prejudices, which had ample indulgences during the Christian-fascist killings of Bosnian Muslims in former Yugoslavia, find a receptive audience among the far right all around the world. This is the sort of folk Breivik most admires.

So if he is mad — and I don’t for a minute think he is — he at least has the lucidity needed to expound at length his thesis. Putting it as plainly as I can, that thesis is as follows. The Christian world is under attack and may only be redeemed through a violent and atavistic effort to repel modernism, as manifested in the twin forces of Bolshevism/Marxism and liberalism. Note that this is the argument which gained an audience in the late Weimar Republic, excepting one important detail: anti-Semitism. Nowhere does Breivik stoop in this manner, and nor does he profess to admire Hitler or the Third Reich. (Mein Kampf comes up, but only to make the point that Goebbels’ propaganda techniques are today being employed by the multiculturalists.) Rather than the familiar scapegoating of the Jews we find instead the Islamic menace, which has the curious effect of aligning this proto-fascist with Israel. Do not be misled however by the character of the creed in this new political sleeping arrangement.

As a parting exercise, I invite you to submit to a thought experiment. Imagine if you will that Breivik’s war does arrive, and in the form for which he has committed mass murder. Whose side will you be on? I myself have no desire to be on either. Precisely the things I detest about jihadism I hate also about Breivik’s holy war and the thinly-veiled authoritarianism of those who have attempted to qualify or explain away his actions. By apologize I refer to those who have publicly denounced his methods only to then say “he has a point.” If you crawl even a bit into his head, you see that you can’t pick and choose so languidly: the disease of his worldview is down to the bone. Returning to the point at which I began, I observe with relief the failure of Berwick’s appeal to Hindutva chauvinism and every other kind of bigotry. His manifesto is a failure, and he is a failure also. Meanwhile the work of civilization — in whose service labour millions of Christians, Jews, Muslims, Buddhists, atheists, agnostics, and Hindus — marches forward. Amen.