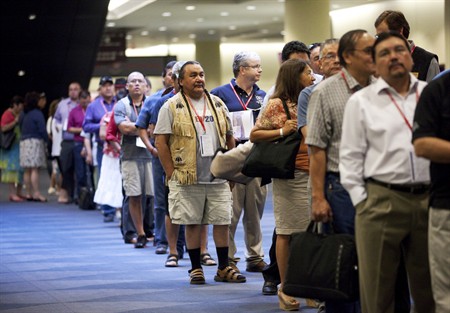 “THERE ARE MOMENTS,” says the Annual General Assembly Co-Chair, Harold Tarbell, and he’s right. It will turn out to be the most emotional scene of the Assembly of First Nations’ three-day Toronto gathering: a cheerful and wholesome-looking, blonde-haired and blue-eyed thirteen year-old from Niagara Falls, brought to the podium at the behest of child-rights advocate Cindy Blackstock, has just delivered the week’s shortest but perhaps most eloquent speech, and the audience is on their feet:

Hello everybody, my name is Wes Prankard. For the past three years I have been trying to bridge the gap between Aboriginal and non-Aboriginal children. What I’ve been doing started three years ago, when I saw pictures of the community Attawapiskat. Just seeing these conditions the children were living in, I just knew it wasn’t fair. And so I decided to do something.

In two minutes, the young boy summarizes not only what he’s done, but what he’s going to do, and why: the $90,000 he raised has built a playground in Attawapiskat, and his next projects are two foster homes and ten playgrounds in other aboriginal communities. “What I’ve been doing for the past three years is not charity,” he asserts. “It’s justice. It’s making something right that should have been done.” The AFN chiefs and delegates are moved, so much so that an honour song is performed to acknowledge this remarkable young man.

I’ve no longer enough fingers and thumbs to count the AFN annual assemblies I’ve attended. In the past decade I’ve sat through countless speeches, some that went on for what felt like hours — those peripatetic, mind-numbing affairs rehearsing the set-list of tragedies and grievances. This year, eight candidates for National Chief delivered impassioned, eloquent and crisp presentations. Some speeches were quite powerful, but none roused the audience to a degree warranting comparison with the teenage hero from southern Ontario.

Not that there weren’t moments in the election race as well. The campaign speech of candidate Terry Nelson, a former Roseau River Chief, comes to mind: “The clear message that I want to deliver here is that it’s not good enough to talk about victims, or to believe ourselves as victims. The clear message is that there’s nobody going to come rescue us. We have to rescue ourselves.” It’s a powerful and empowering message, and it’s near certain to be the truth, even if Nelson happened to be the wrong messenger. We indigenous people are haunted by history, defined in so many ways by misfortune. First Nations people well know Canada is not going to rescue them, but that’s beside the point. The desire is for Canadians to understand, and for Canada to chart a new course, like the blonde-haired boy who stepped in and did what the politicians couldn’t or wouldn’t. Not charity, but some justice.

In a 1925 speech titled “Justice From Now On,” the Six Nation’s leader, Deskaheh, said of the white and red man that “there is no difference between us, under the skins, that any expert with a carving knife has ever discovered.” This applies in particular to our politicians. The politics across Indian Country look a lot like the politics of Ottawa. There are regional disputes, back-room deals, personal animosities, and struggles for power and prestige. Indeed, despite all the talk about the importance of aboriginal cultures and languages, the AFN (a non-profit corporation established under federal law) conducts its affairs on the federal model. The details of leadership are arranged by the politicians — many of whom are lawyers — during closed-door discussions. For most of the so-called grassroots, the plane ticket, hotel and $350 registration fee (which gets you free coffee and a folding chair in the auditorium) is beyond reach. Despite this, if for whatever reasons there were no longer an AFN, the grassroots would reconstitute it. The same is true of all representational politics, without which we humans seem unable to conduct our affairs.

Maybe we need politics because there are problems we feel unable to solve as individuals. The contemporary history of First Nations politics goes back almost to the beginning of the twentieth century, when the initial efforts were undertaken to establish a strong and unified voice. By mid-century, there existed a generation of English-speaking aboriginal people familiar with the workings of Canada’s government. In the 1960s, The National Indian Brotherhood — which in 1982 became the Assembly of First Nations — began lobbying the federal government on education and treaty rights, opposing for examples Jean Chrétien’s 1969 White Paper and the Indian Residential School System. The stated objectives of the AFN, a national representative organization composed of chiefs from 630 First Nation communities, are:

The chiefs constituting the AFN are locally elected leaders who govern under the terms of Canada’s Indian Act. The AFN is an assembly of elected officials, rather like a municipal association, who further their local and regional concerns by raising up a high-profile representative. The AFN pressures Ottawa on issues such as treaty rights, economic development, education, languages and literacy, health, housing, social development, justice, taxation, land claims, and the environment. And, although the fact is rarely noted, the AFN also provides a useful and welcomed service to the Canadian government, by establishing an official to represent over 600 diverse and widely dispersed First Nations communities.

The diversity of First Nations can not be overstated. The Ottawa- and Toronto-based mainstream media cast the 2012 AFN election as an internal disagreement between the negotiators — represented by incumbent Shawn Atleo — and the agitators like Terry Nelson and the young lawyer and Ryerson professor-outsider, Pam Palmater. This is only a piece of the complex reality. Today, First Nations communities range from isolated, hunting-based micro-villages to huge, oil-rich and industry-friendly territories on the margins of urban centres. This means that a successful National Chief must negotiate and bargain and cajole across his internal constituencies just as he must with the feds. Next, consider demographics. The entry of four strong women and a new, younger generation into the race shows that there’s a hunger for a more inclusive and accountable national organization. Indian Country is eager to advance the AFN’s evolution, by opening the doors of the inner sanctum to women and youth, and many Regional Chiefs not only accept but desire this inevitability. And, this being politics, there is the business also of personality clashes and rivalry and ambition.

A blind spot of the “negotiator versus agitator” formula is the remarkable ideological unity of the candidates, and indeed of First Nations people. We do tend to see Ottawa as an adversary, for obvious historical reasons. As long as the topic is the Federal Government of Canada, the people march lockstep. Pam Palmater spoke for many when she said, “We have to work with this government. They’re in our house. And we want to work with them. But the choice is not about working with the federal government in an abusive relationship.” AFN leadership races are matters of style and nuance, fought between those who choose to call the Indian Residential School System a mistake and those who insist on labelling it a racist genocide. There are hundreds such distinctions, all honest and sincere and having their receptive constituency, and the successful National Chief candidate is usually of the Shawn Atleo type, the politician who can cross the fault lines to deliver to a plurality of the voters a piece of their particular truth. Such politicians succeed through caution, giving near everyone something and no one everything. If that doesn’t sound familiar, then you’re not paying much attention to Ottawa these days.

By the third ballot, National Chief Shawn Atleo was, as expected, victorious. Receiving sixty-seven percent of the vote, he defeated his principal challenger Pam Palmater, whose take of the pot was twenty-eight. Both are articulate, educated, and polished. Depending upon who you ask, Palmater did either better or worse than expected, but it’s uncontroversial that her entry from outside the established channels — most candidates have a background in AFN politics — generated excitement in a race which to that point had been widely seen as foregone. Palmater was endorsed by former AFN National Chief Matthew Coon Come, which reinforced her credibility and re-directed votes from Ellen Gabriel and the former Grand Chief Diane Kelly. Running a populist campaign aimed directly at Atleo, she asserted that “the status quo is killing our people.” The final vote suggests that more than one chief in four agrees, a message the National Chief will bear in mind in the months ahead.

Terry Nelson was written off by many as too radical and controversial. Nonetheless, he finished a decent fourth place in the first ballot and third in the second, and was virtually tied with Diane Kelly. Toward the bottom of the tally was the establishment challenger, Regional Chief Bill Erasmus, who despite his noisy youth contingent was seen as lacking the political shrewdness and resources of Atleo. The lawyer Joan Jack and Regional Chief George Stanley, both falling notably short in the inspirational category, were forced out of the competition in the first ballot, having gathered between them less than five percent of the votes.

In the end, the winner of the political battle was arguably the one who is the best at politics. Atleo’s speech, big-picture and rich in grand themes as well as historical allusions, was the work of a polished orator. Outlining his “comprehensive and clear plan … with four interconnected elements,” Atleo touched upon the full range of themes — “safety, healing and security,” ending violence against women, a national inquiry on missing women, sustainable economic development, protecting the environment, treaties and inherent rights, replacing the Indian Act, Indian control of Indian education, the traditions and values of ancestors, and the inheritance of youth and future generations.

Though the focus is on races and issues and votes, there is a great deal to an AFN assembly aside from the electoral politics. Vendors arrive in large numbers with their products. Business deals are made. Then there are the many after-hours social events, the cultural performances and the parties and the receptions. For a few days Indian Country comes to your city, a networking wet-dream for anyone looking to drum up some business or cut a deal or catch up with distant friends or just be among the people. You can call that politics too, and in a sense you would be right. We human beings are political creatures, and no one out there is going to rescue us from that, either.