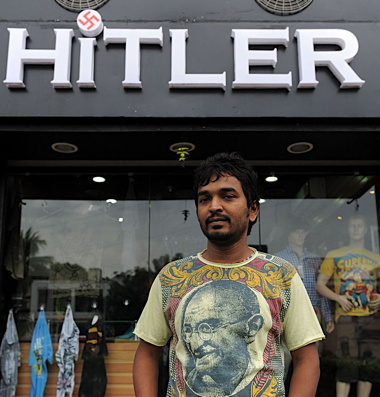 ALMOST PRECISELY seventy years ago, in March of 1942, Winston Churchill dispatched his Marxist-leaning cabinet minister and political rival Stafford Cripps to secure India’s co-operation in the war against Hitler. Partly a result of the well-founded suspicions of Indian nationalists — chief among whom were Jawaharlal Nehru, Rajaji, Subhas Chandra Bose and Mohandas Gandhi — but mostly the result of Churchill’s covert efforts, the negotiations of the Cripps mission failed (as Churchill all along intended). In the subsequent months Gandhi, anticipating a German-Japanese victory, led his colleagues in the Quit India movement, demanding the withdrawal of Britain and immediate Indian independence.

This and much more came to my mind as I beheld a photo of the “Hitler” clothing store, the owner Rajesh Shah (a Gujarati surname meaning merchant) standing before it in a Gandhi T-shirt. Shah and his business partner profess to know little of the Nazi leader, and have stated that this selection refers to a strict grand-parent and not the murderous NSDAP Führer. It’s yours to choose whether this is a lie told in the service of self-promotion, or an admission of ignorance, and to determine which constitutes the greater shame.

The Indian aspect of the 1939-1945 war against fascism was widely underappreciated and misunderstood by the British public of the time. Indian leaders, for their part, were divided over Hitler and the German threat. Cripps’ mission was dismissed in many quarters as Churchill’s attempt to rid himself of an uncomfortably popular politician, by sending him on a fool’s errand. So it was. There was more at risk, however, should the Indian National Congress’ withholding of support inspire broader Indian non-participation in the war, thereby necessitating a diversion of troops from the European field. Gandhi’s policy of ahimsa (“non violence”) and satyagraha (“firmness in the truth” — a strategy he perfected while defending textile workers) led him as far as recommending mass-suicide, not only of Germany’s Jews but of Indians, should a Nazi takeover of the sub-continent occur. From this policy Nehru and Bose dissented, though as respectively anti-German and pro-German their disagreement was itself the occasion of an argument.

The war was for Indian nationalists an intensely complex and divisive matter. United in their loathing of British imperialism, India’s leaders agreed on little else. Characterized by Cripps as a “thoroughly bad egg” and more “pro-Subhas than pro-fascist,” the politically naïve and opportunistic Bose attempted both with Russia and Germany a misguided series of alliances, culminating in his creation of the Waffen SS’s Indian Legion. Entirely lost on Bose, despite his personal conversations with the German leader, was Hitler’s admiration of the British Raj — an arrangement he intended to reproduce in present-day Pakistan — and race-based contempt for the “mountebanks” of the Indian National Congress. (Somewhere in the vicinity of this contempt one may place Churchill’s assessment of Gandhi as “a half-naked fakir.”)

To a greater degree than most of his Congress colleagues, Gandhi appears in retrospect to have been ideologically and morally consistent, as well as aware of the threat which Hitler posed. Even as he abjured war, he acknowledged the necessity of repudiating Nazi race theories. Nehru regarded apprehensively Gandhi’s demand for an immediate British withdrawal followed by negotiations with Japan, but accepted the Mahatma’s moral authority and leadership, as did other dissenting Congress members such as Abul Kalam Azad.

To the end of the war, nationalists never forgave the presumption of the British Governor-General of India, Lord Linlithgow, who had committed India to war without consultation, never mind consent. The British Indian Army remained in the fight and was joined by Muhammad Ali Jinnah’s Muslim League, and after the war’s conclusion Churchill’s cynical 1942 political gambit yielded to the realization there was now no turning back. Along with Hitler, British imperialism had been dealt a fatal strike.