Going to the Antique Market

I DON’T KNOW when the antique market first got underway, but I suspect that like everything else the notion of an antique is era-specific. Mass industrial production of commercial consumer goods is an innovation whose origins are of slight remove, both geographically and historically. Before 1900, there were relative few objects to be bought and sold, near all of them hand produced in small number and bartered outside of the production and marketing cycles which now seem as inevitable to us as breathing. This is not to suggest that the idea of mass production had not yet occurred by the twentieth century. In textiles and food and furnishings and housewares, and a few other lucrative industries, industrial-based fortunes were amassed in the eighteenth and nineteenth centuries. But the antique, which by necessity requires time to develop, is a modern idea. And that is our present topic. 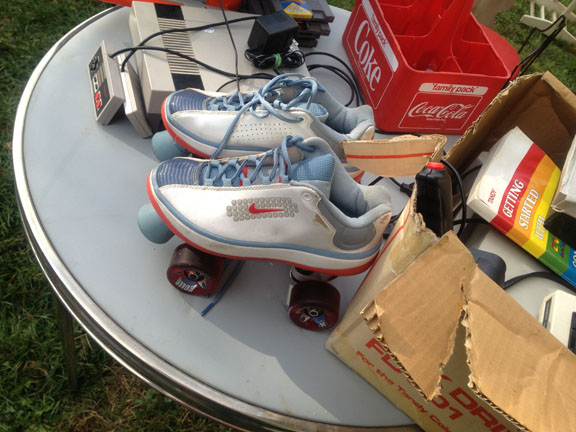 What is the difference between an antique object and an object that is merely old? What distinguishes a collectible from a piece of crap? Only the purchasers ready to part with their money cleft the otherwise contiguous and indistinguishable terrain of these neighbouring ideas. The antique — or junk, or flea — market presumes the collector, and the collector presumes a consumer goods culture in which year after year one consumer trend yields to another, thereby producing a retrospective scarcity of goods. Otherwise, what would be the point? As the past slips away, the supply of that past diminishes, relative to demand. Sometimes, and indeed most times, demand only swells after a passing of time. It is almost incredible, for me at least, to walk among the cast-away stuff of earlier days and to realize that for every curious and rusty and anachronistic object one sees there is an army of avid collectors. But then, I am something of a collector of a few kinds of old objects myself, and I’m well aware that, seen from a certain perspective, these keen interests of mine are no less weird.

The experience of a flea market or antique market changes across one’s life. In my 20s, I was captivated by the sound and elegant and (I would say) superior craft of early- to mid-century furniture. In certain kinds of objects I preferred the style of earlier trends as against those of the present. But then some years ago I found myself at flea markets coming upon the castaways of my own earlier days, and I was able to recall that liberating exhilaration of putting something to the curb to make way for The New Thing. From then forward a trip to the antique market became a kind of double movement, at once recollecting the superior workmanship of the past and stumbling on the What Were We Thinking? fads of  my younger days. 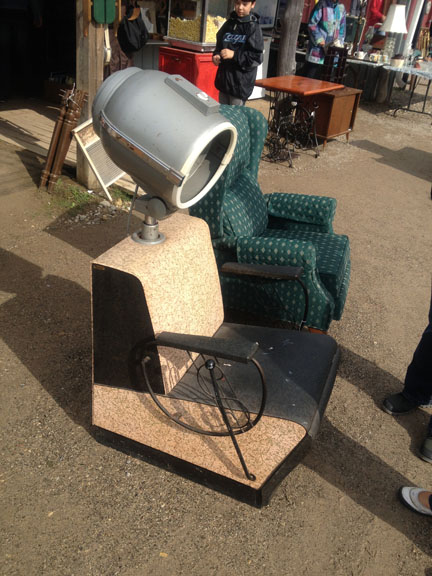 People throw away their world to make room for something else. That something else is bought and sold and thrown away for the same reason.  It is possible, or at least thinkable, that in this ongoing transaction some objectively decent and civilized ideas and objects fall to the curbside. I think it’s in pursuit of this most elusive thing — let’s call it lost treasure —  that I’m drawn to civilization’s junk yard. At my very foundation I mistrust society’s wisdom to not throw away something of charm, decency, beauty and dignity to make way for a temporary gain, such as in efficiency or commercial advantage. In a sense I do believe in human progress (and that is why I have never considered myself a political conservative), but along that path there are a good many setbacks and mis-steps. So whenever I can I play back the record, as it were, to mitigate my suspicion that something of value was left behind in the march toward improvement.

Not long ago I read Martin Amis’s 1992 novel Time’s Arrow, a story told backward from the death of its protagonist to his birth. Beginning in the 1990s and ending in 1916, the year of the main character’s birth, Time’s Arrow carries us along the uplifting narrative trajectory of mid-western America. Before our eyes, the factories and the jobs multiply, the cities become cleaner, and the anxieties of A-type gym addicts and middle-class social climbers yield to the pleasures of life in thriving communities of abundant promise and opportunity. A happy story, in that very brief space before you remember it is being told backwards. Amis stands the world on its head, and the result is both comic and depressing.

There were quite a few nifty things to see this past weekend at the Aberfoyle market, west of Toronto and not far from Guelph, Ontario. Above all else I enjoy bumping into curiosities that are fun to look at but that I have no interest in buying. I have more than enough stuff. But an encounter with the past is never just about stuff. The interplay of past and present and future although materialized in objects is not restricted to them. There were some good ideas back in the day, and there are some pretty dreadful ones thriving now. Our species has thrown away a lot of garbage and for good reason, but in some instances only to burden ourselves with garbage of another sort. Let the buyer of human progress beware. There are no money-back guarantees.

Like Loading...
‹ Romney’s the victim of campaigns that reduce issues to cartoons and caricatures
If it’s 1938 in Iran, what year is it in Ottawa? ›