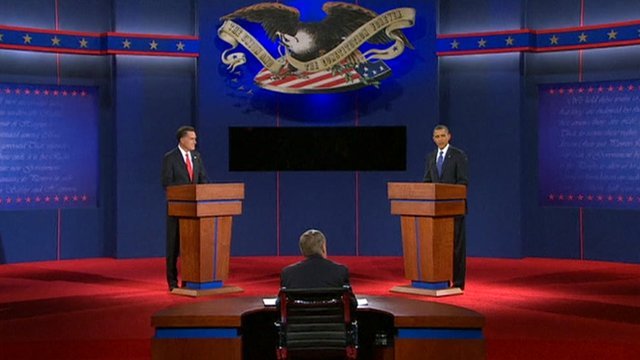 I‘VE TAKEN IN all the US presidential and vice-presidential debates. Over the years these have become highly rehearsed and scripted affairs, meticulously polished and doubtless focus group vetted and — well, who knows what else the candidates do these days. Computer modelling, maybe. Virtual reality simulations. Testing on non-human animals. I wouldn’t be surprised to hear that media experts and pollsters and psychics are also consulted. The result of all this engineering is debate not unlike processed food: enjoyable, but who knows what’s really in it.

Keeping to the metaphor, I note on my palate more than a hint of the middle class. In the finish are notes of job creation. If there are additives, taxes on middle earners are not among them. According to the wrapper it’s low in calories, future deficits and breaks for the top few percent. On the merits and approach of these points both candidates agree, and yet we are led to believe this is an election of high stakes and stark contrasts. I noted that excellent answers were given at the town hall — not to the questions asked by the audience members, but nonetheless solid, road tested answers. Mr. Obama was for all the things people are for and against all the things people are against, unlike his opponent. Mr. Romney, the same. The choice couldn’t be more clear.

Until only recently, the United States of America was held by most of its citizens to be one enormous middle class. To differ with this assessment was to invite the charge of socialism, Marxism or some other subversive agenda having to do with the dirty business of class warfare. It is the case that economic classes are still regarded in America as a distinction of quantity, rather than of quality, as it is in the radical/dialectical-materialist tradition. In other words, the folks at the top are just like you and me, mate, only having more of what we have. In contrast, the Marxist would situate the capitalist class in opposition to the middle and working classes (the later category nowhere appearing in any of the debates). The distinction of course touches upon class warfare, which can not exist if the interests of the owners of financial and industrial capital correspond to the interests of employees.

From this it follows that all the talk about the one or five percent, or whatever it is, is either so much meaningless and demagogic splitting of distinctionless differences — which is quite possible — or else there really is a portion of American society who thrives by tossing their fellow citizens overboard. Since there is hardly today a political candidate, Republican or Democrat, who does not engage in this sort of percentages-based analysis, it is worth asking if the language of economic class is going to be pressed to logical conclusions — viz. that there are going to be winners and losers in the American economy of the foreseeable future, and best of luck to you should you happen to find yourself among the losers.

This may seem a diversion, but I think it gets to the very core of why the Presidential debates are both so polished and so empty of detail. No candidate, if he is to be credible, can utter a number of important facts plainly evident to the impartial observer, and so the emptiness must be filled instead with pleasant-sounding but essentially meaningless assertions. These facts are as follows:

– The ability of an American President to create jobs is greatly overstated
– It is improbable that the structural deficit can be repaired without reforms that in any case few in a position to undertake them want
– It is impossible to mount political campaigns without money, and the money must come from the very people who oppose a tax regime that does not strongly favour capital as against wages and salaries
– The middle classes are essentially of no use to a politician other than on election day, and much of the poor not even then
– The economy is doing very well for the social and economic class among which most politicians move.

Nothing I have itemized above will be controversial or surprising to an informed reader, but any one of these points would be fatal to the politician who uttered it in public. Nor will a Democratic president differ all that much from a Republican, where macroeconomic policies are concerned. Other than Warren Buffet, no one who lives on dividends really believes that a dollar which falls into the lap as a result of capital gains should be taxed at the rate of a dollar earned through physical exertion. In a capitalist economy, deference to capitalists is paramount. This however must never be admitted in the presence of people who are not in on the game, which is why politics is as carefully processed as your TV dinner.