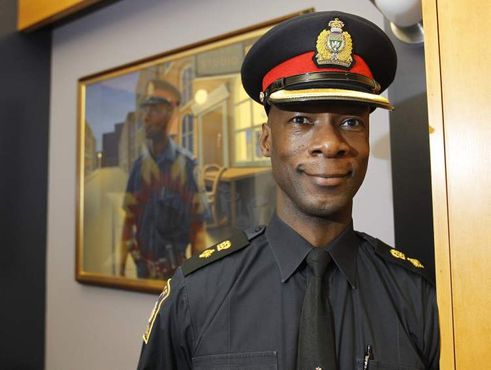 THE ACTING CHIEF of Winnipeg’s police is correct that his comments about prayer and crime were taken out of context. Here is an excerpt of the interview as it appeared in Christian Week on October 11:

“I’m a little tired of us…being ‘[the] murder capital of Canada,'” says Devon Clunis, who was appointed chief of police at the beginning of October. “People consistently say, ‘How are you going to solve that?’ It’s not simply going to be because we’re going to go out there and police it away. I truly believe that prayer will be a significant piece of that.”

“What would happen if we all just truly—I’m talking about all religious stripes here—started praying for the peace of this city and then actually started putting some action behind that?” he adds. “I believe something phenomenal is going to happen in our city. I truly believe it’s coming. I don’t think I’ve arrived at this position just by chance.”

Mr. Clunis expressed surprise at the controversy elicited by his views, as if he’d been unaware that the Internet is itself a context. In the diverse world of the Internet, there are some who do not agree with the idea that policing is an insufficient consideration of the police. It’s probably true that crime can not be policed away entirely, but policing is the business which Mr. Clunis is in, and so it’s a discouragement to find him submitting to the impotence of his chosen profession in advance.

There are necessary and sound observations to be made of Chief Clunis’s public statements. He has in my view an inalienable right to his private beliefs, and his right furthermore to share them with a publication should be defended. The belief that prayer will prevail against crime is indeed a belief — and for a person of faith that is quite enough by way of evidence. Others will be sceptical, and will observe that prayer is not a necessary prerequisite of commitments to “putting some action” behind intent. If you’re not a praying sort of person, you can ponder the life of your community and your place within it on purely material grounds.

Although an atheist, I took no offense to Devon Clunis’s statements. I do wonder though if he privately indulges the commonplace idea among the religious that agnostics, sceptics, and doubters of all kinds are morally suspect. Buried in God talk are often assumptions about the relationships of religious belief and human goodness, and the accepted superiority of faith as against doubt, that are far from certain.

One final observation, concerning this: “What would happen if we all just truly—I’m talking about all religious stripes here—started praying for the peace of this city and then actually started putting some action behind that?” The answer, I think, is that something of positive value would follow — and the engine of this progress would be the human solidarity and unity of purpose without which we cannot hope to advance. For those of an ecumenical bend, I’ll suggest that it’s to this most broad of arenas that the people of Winnipeg must rally.