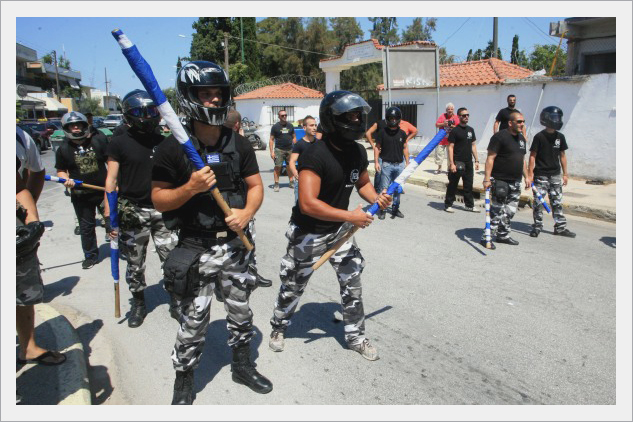 AS THE POLITICAL and economic fortunes of Greece grow more precarious, it becomes harder to separate symptoms of a disease from the side effects of cures. The country’s Finance Minister, Yannis Stournaras, has projected a twenty-five percent contraction of the Greek economy for the years 2008-2014 and a 1930s-styled Depression, both the presumed outcomes of EU-imposed austerity measures.

On the growth side of this ledger we encounter the extraordinary electoral gains this year of street justice authoritarians, most notable Nik Michaloliakos and his Chrysi Avgi, or Golden Dawn party. The blame for both trends — economic malaise and the growth industry of political extremism —  may reasonably be assigned to Greece’s corrupt and inept politicians within the prevailing ND/PASOK coalition. Yet if it happens that short-term (and short-sighted) prescriptions are only further sickening the patient, as appears to be the case, then there may be a surplus of incriminations for the evident quackery.

The polls are now suggesting a favourable view of Golden Dawn among twenty-two percent of the population, a number corresponding exactly with the standing of Canada’s Liberal party. “None of them” is now the top choice (at 40%) of the had-it-up-to-here Greek voters. This has provoked anguished recollections of the Treaty of Paris and the resulting economic and political catastrophes which soon brought down the Weimar Republic and raised up the NSDAP, otherwise known as the National Socialists, or Nazis. (Invariably the punch-line of this rehearsal of the Third Reich’s ascent is an inferred historical irony: aiding Greek neo-fascism today are the economic conditions brought about by Germany’s stubborn demand for austerity.) Vigilance of this kind never rests, and the advisement over crying of wolves aside, perhaps it never should. Laikos Syndezmos – Chrysi Avgi (the “Association of the folk – Golden dawn,” to cite its full and proper name) is indeed as its detractors claim — a growing vigilante mob of menacing black-shirted thugs and irredentist racists.

Greece’s economic prospects are in kind, if not in scale, representative of the Euro’s and of Europe’s economic prospects also. Disaster there will imperil the American economic recovery, which in turn will harm Canada. One can only imagine how much more difficult the already challenging work of economic recovery becomes as reformist-oriented regimes are displaced seat-by-seat to make way for skin-headed truncheon-bearing revolutionaries.

Lurking in the shadows of the Golden Dawn is indeed a historical irony, but it is not the widely cited case of Adolph Hitler and his devotees. Rather it is the so-called “4th of August” Ioannis Metaxas dictatorship, upon which Chrysi Avgi is largely, though not exclusively, modeled. Established in August 1936 to circumvent a discredited and gridlocked parliament, as well as to address an economic crisis — is this sounding familiar? —, the Metaxas dictatorship declared a state of emergency to undertake reforms of a more anti-capitalist and socialist than fascist character.

The irony to which I refer derives from the fact that many of the proposed Mataxas reforms of the 1930s would arrive throughout the democratic world after the war, including now uncontroversial notions such as the forty-hour work week, maternity leave, minimum wages, and workplace safety. The mixed character of the 4th of August regime, simultaneously authoritarian and reformist-populist, was a product of the times as surely as is the Golden Dawn. In Greek the word avgi can figuratively refer to “the old days” as well as literally to morning and its synonyms, and thus in its atavistic appeals, Chrysi Avgi resembles race-obsessed German fascism much more than it does the Mataxas precedent. Illegal immigrants, the threat of Muslims, Albanians, the reclamation of Istanbul and of other “alienated” territories, neo-paganism and the Greek “folk” are familiar as well as predominant themes of Golden Dawn propaganda.

The unifying thread of this cursory review is the failure of democratic political systems, the remedying of which involved eventual recourse to measures which the Athenians themselves long ago taught us to refer to as “Draconian.” Greece is slowly coming undone before the eyes of the world, and with each passing month the prospect of black shirted goons overtaking the agenda of a European democracy grows not only slightly more thinkable but inevitable. The confidence of Golden Dawn these days may be inferred from their decision to franchise, a move which has led to the opening of a Montreal chapter. They have good reason to be confident. The harsh medicine of austerity has thus far been their principal nutrient.