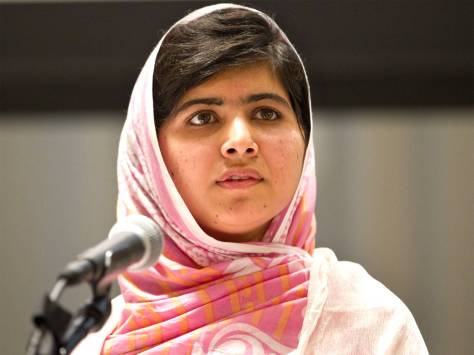 PERHAPS THE MOST remarkable thing about Adnan Rasheed’s defence of the Malala Yousafzai shooting (putting aside the fact it’s a defence) is how predictable and clichéd a performance it is, beginning with its disingenuous preamble “I’m sorry this happened, but ….”

We shouldn’t be surprised. Tehreek-e-Taliban Pakistan is nothing more than violence in service of clichés, and the same is true among the many contemporary variants of religious fascism. Behind the every inconvenience, misfortune and misery of the Umma is America – and behind America the Jew, manipulating governments and citizens into his Satanic New World Order. We are told that scrawled into the boat where Dzokhar Tsarnaev was found were the words, “when you attack one Muslim, you attack all Muslims.” (One is invited to ask if this is true also of, say, attacks upon Americans, and from there to pursue the logical conclusions.) What better way to right violence toward innocents than … an attack upon innocents! Again, a cliché, and one that has great appeal among the progressive American left, who see in random violence a credible form of political protest.

I find myself bored by such lazy and self-loathing argumentation. It’s tempting for critics like me to dismiss the Rasheed letter, but instead I propose we take these occasional defences and statements of principle at their face value. Notice for instance that you’re meant to feel better about the near-fatal shooting of a 15 year-old girl knowing that the Pakistan civil service is corrupt and that Henry Kissinger, an architect of America’s cynical doctrines of regional hegemony, is a Jew. Notice also that it is an unequivocal offense against Islam to criticize the attempted Talibanization of Mingora and the Swat District, as Malala Yousafzai did in her Urdu-language BBC blog, whereas the Talib who shot bullets into her head and neck may or may not have been in error. Adnan Rasheed is simply unprepared to deliberate the act as “Islamically correct or wrong.” To summarize: blogging as a matter of fact about your fear and sorrow is a crime, while the murder of girls falls into religion’s moral grey zone.

The Taliban are correct that Malala Yousafzai is not good for their public relations. She is smart, determined, persistent and articulate. She believes that women are persons with social and political rights equal to men, and she is not looking for clerical permission to pursue her fulfillment and what she believes to be the betterment of her native country. “The Taliban,” Rasheed concludes, “want to implement what is in the book of ALLAH, and [the] UNO want to implement what they have in man-made books.” That is indeed the nature of the dispute — and it isn’t only the United Nations that promotes pluralist-democratic constitutions and secular democracy. This is a human and global effort, one which necessarily involves the taking of a side and seeing it through to its necessary conclusion. It’s good to be reminded now and again that this is so, even if by a Talib of the school of paranoia and hate and futility.