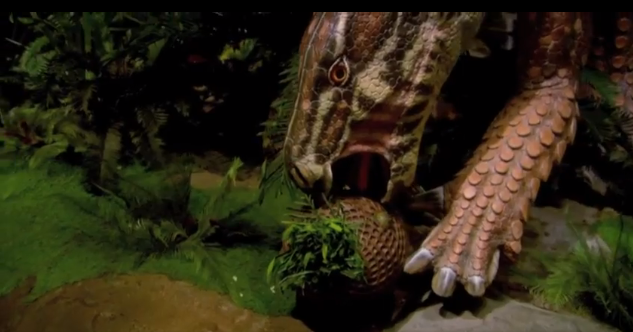 YOU MAY ALREADY have seen the video “Watch Creationists Talking About Creationism” – but if you haven’t, here it is for your viewing pleasure.

And now that you’ve seen it, a quick primer on the business of epistemology – otherwise known as the study of knowledge systems.

There are two categories of reasoning, the inductive versus the deductive. Induction (from a latin compound meaning to lead into something) begins with observation, deduction (to be led from) with a general principle. Scientific reasoning is inductive, meaning it looks at the material world and tries to explain reality on the basis of what is observed. Religion works deduction, organizing observation with reference to (religious) first principles. Notice that the word religion itself means “to bind back,” the binding being applied against the originating principles or ideas of the faith.

An intelligent and pious individual (yes, there is such a thing) must today accept the scientific principle of induction. No one today can ignore the yields of inductive investigation – the dating of our planet by the fossil record and carbon dating, or the plain evidence for the germ theory of disease or for the origins of species in natural selection – and be considered intellectually serious. No one can credibly say that the scientific method is irrelevant and useless.

The creationists instead try to dismiss the disciplines of the scientific method, from microbiology to astrophysics, by stepping beyond the business of epistemology (where they are on unstable ground) in order to slander and to pose rhetorical questions. The video is a good example of this. Mr Darwin must be wrong, because his “theory” (that means “99% certain fact” in science lingo, science being a matter of probability) offers no consolation of an afterlife. Evolution must be a lie, because it is a messy affair wrapped up in disease, death and inefficiency. How can we know, with absolute certainty, what is true and right and good, now and for all time, if we arrived via billions of years of evolution and not (as the Bible says) through an act of “intelligent design” supervised by a commandment-giving deity.

I’ve been dabbling in the Bill Nye debates. Long before the Science Guy was at this effort, I was observing the attempts of Richard Dawkins to defend science and reason. I’ve no doubt that some waverers have come unequivocally to one or another of the rival camps as a result of Mr Dawkins’ efforts. That’s arguably a good day’s work, even Jesus himself advising against throwing in with the lukewarm. But I also happen to suspect it’s a waste of time arguing Darwinism vs. Creationism (or whatever formulation one prefers) so long as the epistemological underbelly of the debate goes mostly unremarked.

Many of the creationists I’ve encountered like to pretend that science and faith are compatible, and that it’s enough, in principle as well as in practice, to assert that all truth is God’s truth. Pushed to admit the incompatibilities of these epistemologies, the faithful will claim that radical atheism is the new religion and that the secularists are fanatics bent on persecuting poor, wholesome Christianity. I’ve been in many discussions that have unwound precisely along these lines. It’s useful to push the conversation until you chip the bedrock. On several occasions I’ve done so (or at least I suspect I’ve done so) and it always is something like the following.

After a longish back-and-forth, my polite and thoughtful High Anglican friend became somewhat exasperated and confessed that whatever the truth of the question (and, really, who among us knows that?), he didn’t want to live in a universe that didn’t have God in it. And by “god” of course he meant the god of the Anglican tribe to which he belonged. The mental atmosphere of his world is, in my estimation, summarized by Philip Larkin’s poem “Church Going.” Larkin nicely catches the tone of someone who has lost all belief and faith in the religious proposition, but who also feels keenly the aesthetic loss. And it’s this loss above all – of the aspirational architecture and the sonorous choir and the warm embrace of an “accoutred frowsty barn” when it’s cold, dark and wet among the world – that Larkin registers and which many of the religious can not bring themselves to admit. Damn your pesky facts, they want God by any means, at any cost.

There is also however a more sinister proposition, even a poison, in the epistemology of the pious. The video nicely catches this too. For when 2+2=5 must be believed in (as one of the video’s interviewee’s asserts) and must therefore be defended and imposed, likely in the mode of cultural warfare, we are all of us endangered in a way that has become familiar. The formula 2+2=5 is a good shorthand for the many irrational and otherwise indefensible propositions of monotheism, for instance that women who swim in the sea are guilty of adultery and that natural disasters are caused by Obamacare and homosexuality. 2+2=5 is a good descriptor for the many assaults upon science and science education which are now taking place across North America, in the name of debate and of “equal time.” The problem of course is that 2+2 does not equal 5, any more than climate change is a myth and the weather is God’s judgement upon nations.

So by all means, Mr Nye, have the debate. But never forget that this is first and foremost a political battle for the right to think clearly and to pursue scientific truth, wherever it may lead.