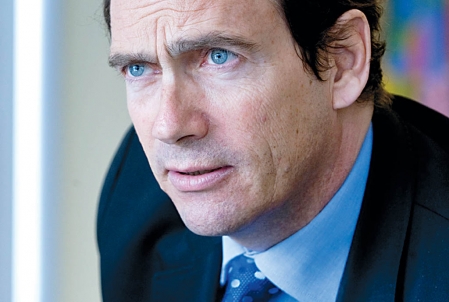 THE QUEBEC ELECTION campaign became a bit more interesting this week with the entry of Pierre Karl Péladeau, of Quebecor Inc., Quebecor Media Inc. and Sun Media Corporation. Mr. Péladeau is well-known as the owner of a global telecommunications empire that includes many assets, both within and without Quebec. Now he wishes to be known, goodness knows why, as an aspiring Parti Québécois politician. He’s considered an aggressive and iron-fisted businessman, and no one doubts the nature of his new ambition, to become the President of the Nation of Quebec, as well as the king of Quebec media.

Among Péladeau’s dabblings is a campaign to return the Quebec Nordiques to Quebec City. The Nordiques left for America just as they were poised to seize the Stanley Cup, which they did in their first year as the Colorado Avalanche. This tragic loss of an asset to allophones and foreigners will doubtless be the stuff of future Quebec textbooks, but I recall being in Quebec City in 1994 with a separatist acquaintance who lamented that no one much cared about it anyway.

Not every such misfortune, however, is so blandly apprehended. According to a CBC article, after Péladeau’s Quebecor World was bankrupted in 2008, he “marked his souring on the Canadian business establishment. Royal Bank of Canada led a syndicate of banks that refused to refinance Quebecor World’s debt.” A hint of resentment and score-settling may therefore lurk behind his recent taking up of electoral politics, and under the separatism banner, although it’s just as likely he came by his politics honestly, in part by absorbing them from his father. One can never be sure, for example when Marois insists that Quebec is open to all and that all are welcomed, despite PQ gestures like the Charte de la laïcité which suggest otherwise.

The arrival of Péladeau is less of a game changer than it is a useful instance of clarification. Remember that Pauline Marois smoothed the way in June 2011 to help Péladeau in his work of bringing the NHL franchise to a shiny new, Quebecor-managed and taxpayer-financed, sports arena. It was too much even for some PQ members, several of whom defected to become National Assembly independents. Two years later Marois appointed Péladeau Chairman of the Board of Hydro Quebec, a move rich with symbolism.

Symbols matter in politics, and Péladeau is himself a symbol – of state-corporatist cronyism, of course, but of other salient features of the PQ as well.  We begin with the logo of the PQ, which looks like a tire that has encountered a shard of glass. The poet Roland Giguère, who designed the logo in 1968, had in mind the shattering of English colonialism with the blunt object of cultural and economic nationalism. Hydro-Québec fit perfectly into this scheme, created as it was to leverage the province’s abundant energy resources in service of the ’62 Lasage campaign slogan, Maîtres chez nous (“Masters of our own house”).

Prior to Natural Resource Minister René Lévesque’s nationalization campaign, Quebec’s energy resources were controlled by anglos, principally the Iron Ore Co. of Canada, a branch of Hanna Mining in Cleveland, Ohio. Nationalization was not only a potent political symbol, it was a bold economic move – and nothing less than economic boldness could further the cause of modernization in the years of the Quiet Revolution.

Along the way nationalist symbolism went from serving aspirations to supplanting them, and this is the context for understanding the blunt object that is Péladeau. The on-again, off-again causes of sovereignty-association and political independence are now no longer means to be leveraged by economic policies, they are the PQ’s economic policy. Péladeau was doubtless brought into the fold to bolster the party’s economic credibility, not by pushing toward more thoughtful economic planning, but rather by being drawn himself into the theatre of symbols. And so, just as Marois shrugs off recent and bad economic news, Péladeau thrusts his fist into the air and chants inspirational slogans. And somehow, in combination, these are intended to add up to the sum of economic credibility.

When the PQ won its first electoral victory, in 1976, the slogan of that campaign was “We need a real government.” How timely that sounds against the present-day background of Quebec’s miserable finances and political corruption. Instead of real government’s economic vision, supported by detailed policies and plans, we behold the faux government knee-jerk demagoguery of identity politics. And that’s in the here and now, before we’ve even begun to calculate the additional burdens of planning for a potential post-confederation Quebec. Has anyone even attempted such a thing? Not likely.

The name of Lucien Bouchard is tumbling from a lot of lips these days, but the only thing Bouchard and Péladeau have in common is Brian Mulroney. Since there’s hardly a boardroom or a backroom that doesn’t have Mr. Mulroney in it, the coincidence is itself unremarkable. Péladeau brings a unique and coveted background to the PQ, having for decades dined on the earnings of tabloid agitprop and rabble rousing emotionalism. His business acumen and his knack for rube exploitation are simply the latest assets to be nationalized by a now desperate campaign, most other assets having been over-exploited, squandered, or driven away.