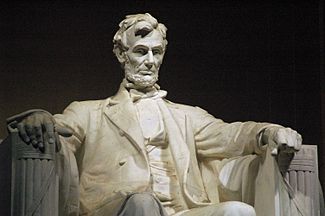 The fog of a Washington sky obscures the waning moon, as an inaugural gloom overtakes the nation. Lightning strikes the Lincoln Memorial, piercing the paraffin-saturated ceiling of translucent Alabama marble. The bolt electrifies the sixteenth President of the United States. The animated figure rises, breaking free of the fasces with one heave of its arms. Mr. Lincoln has returned.

I came upon him in the night. I was terrified at this apparition—a twenty-eight foot President who had been dead a century when I was born. He sensed my panic.
“I mean you no harm,” he reassured me. “Please tell me where I am.”
I answered him as best I could. There was so much to say, but I kept to the elementals. The date, the location.
He surveyed the distant buildings and the passing cars. There was a plane in the sky. I showed him my phone.
“What an advanced and sophisticated place this America has become!” he said.
He asked me the name of the President. I showed him a video.
“That? That is the President?” he said.
“Yes,” I said.
“I take back my earlier words,” he said.

The sun was rising. He told me that he sensed he’d soon be restored to lifeless marble. He had something he wanted to say before he departed.

“Your President came to me only days ago,” he said. “I believe he was with his daughter.”
“His wife,” I said.
“Ah! His wife.”
“His third wife, actually.”
“Yes, yes. I get the picture. Anyways, I remember him well. The hair, the power tie, the orange grimace of his face. He walked right up to my chair. And then he spoke.”
“What did he say?”
“He said:

‘Hello Mr. Lincoln. You were a tremendous President, a man who did something that was a very vital thing to do at that time. Ten years before or twenty years before, what you were doing would never have even been thought possible. You did something that was a very important thing to do, and especially at that time. And Nixon failed, I think to a certain extent, because of his personality. You know? It was just that personality. Very severe, very exclusive. In other words, people couldn’t come in. And people didn’t like him. I mean, people didn’t like him.’

And I thought to myself, What the hell is this orange person talking about? Do you have any idea?”
“No, Mister President,” I said. “None of us here do.”
“And then he said, ‘I am going to be an even greater President than you were, watch and see.’ I thought he was just some crazy guy.”
“And then what happened?” I said.
“He told me that, just as I had led the country through a time of war and crisis and division, so would he. He told me that he too would conquer his enemies and make America great.”
I could hardly believe what the President was telling me. I was gobsmacked.
“And then the orange fellow tried to sell me some jewellery.”