His nice words don’t quite square with nasty realities

THE HEADLINES trumpeting Jagmeet Singh’s NDP leadership win each conformed to one of two themes. Either his victory as a “non-white” candidate was unprecedented, or it could be credited to the very-much-precedented appeal of charisma, GQ-worthy style, and handsomeness. The American papers in particular didn’t fail to notice that another Trudeau had arrived on the scene, ending the Prime Minister’s cornering of the charm market. Nor does the ringing of familiar bells end there. Kesh and kara aside, the new NDP leader is political boilerplate: a lawyer from Scarborough who speaks (cautiously) in both official languages and who celebrates Canada’s diversity and wholesomeness in, no doubt, focused-group-tested terms. 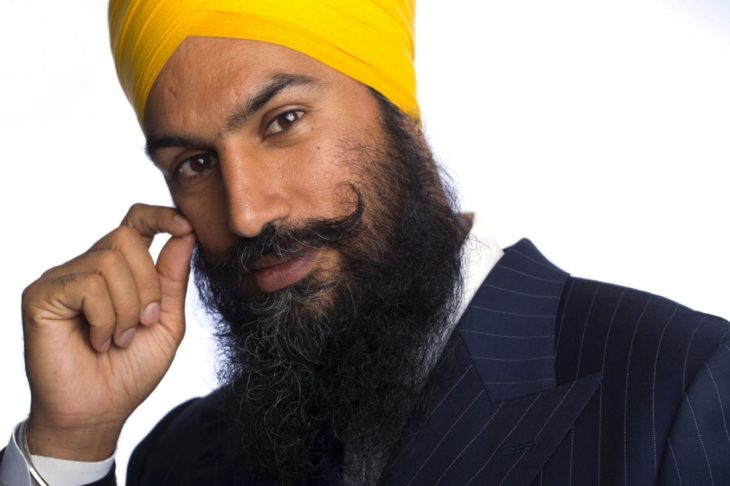 But, of course, he isn’t just another politician. He’s Sikh, and he is now leader of a federal political party, and as such he’s nullified a barrier to political office we should be glad to see nullified. The Charisma War can now begin, and how discouraging this prospect must be for the Conservative leader, Mr. Scheer, whose New York Times headline said: “Canada’s Conservatives Choose Andrew Scheer as Their New Leader.” In the meantime we all know how these battles are going to be fought, and that is with the ammunition of buttery words shot at the hardworking families of the middle class. Gone are the days when a political party might actually have something to fight for or about, such as proletariat revolution or tooth-and-claw capitalism. It’s three parties for the middle class, comrade. So who do you think has the nicest suit?

There are still things in this world for which and over which people fight and kill and die. The recent history of the Indian and Pakistan Punjab, birthplace of Jagmeet Singh’s parents, comes to mind. Since the British withdrawal from the region in the 1940s, the Punjab and Kashmir regions have been among the world’s most dangerous and volatile. The sectarian hatreds of two nuclear states and their diverse internal populations have engendered horrific violence, and while it may be true that none of this registers with the average Canadian, some of the old-world baggage has found its way to places like Brampton and Surrey and Vancouver. Canadians ought to care about that, more than they do.

There was a time when obscure causes like an independent Sikh state of Khalistan (obscure from a Canadian perspective) made headlines from Halifax to Vancouver. On June 23, 1985, Sikh terrorists associated with Babbar Khalsa put a bomb on Air India Flight 182 as well as on a plane bound for Japan—the latter detonated at the Japanese airport, killing the baggage handlers—one member of Babbar Khalsa having vowed that “we will not rest” until they had killed 50,000 Hindus. There are Sikh nationalists who to this day celebrate as a martyr the man behind this crime, the largest-ever mass murder of Canadian citizens, Talwinder Singh Babbar.

What has this to do with Jagmeet Singh? Nothing, really. But at the prospect of questions about Khalistan and Sikh extremism and the “martyrdom” of Talwinder Singh Babbar, the charming bespoke Jagmeet Singh fade into the curtains to be replaced by a cagey and defensive and lawyerly Jagmeet Singh? Why does he demand that all questions along these lines be submitted in advance and all transcriptions of his answers vetted prior to publication? Probably all the reasons one asks for these things: to prepare an answer, to avoid surprises, to make the best possible impression.

A headline from Sikh Siyasat News

To his credit, Jagmeet Singh appeared on the October 2nd episode of Power and Politics despite Terry Milewski’s refusal to grant Singh’s terms. There, Milewski asked, “Do you think that some Canadian Sikhs go too far when they honour Talwinder Singh Babbar as a martyr of the Sikh nation?” Singh argued, falsely in my view, that Sikhs and Hindus co-exist “in peace and harmony, and we need to celebrate that.” (I ask you: how on earth can you square this idea with the Flight 182 bombing?) Pressed further, he said:

So, it is so unacceptable that violence that was committed—the heinous massacre that was committed—is something that Sikhs, Muslim, Hindus all denounced, the violence as perpetrated against innocent Canadian lives, is something we all denounce. I regularly denounce it on the anniversary. It’s something that we all collectively are opposed to. There is no question about this, that innocent lives were killed and it is completely unacceptable and needs to be denounced as a terrorist act.

He never answered the question, “Do you think that some Canadian Sikhs go too far when they honour Talwinder Singh Babbar as a martyr of the Sikh nation?” But he did answer two questions that Terry Milewski didn’t ask. Again I am reminded of Trudeau.