I watched the AFN Special Chiefs Assembly. This is what I saw

IF YOU FOLLOWED THE Assembly of First Nations Special Chiefs Assembly this week, like I did, you heard two federal cabinet ministers (and omg one of them is Indigenous) say that Canada did some very no good very bad things in the past—but the Trudeau Liberal government is a new and different government altogether. And on account of this differentlyness very good great things are going to happen to us very soon because. WAIT shouted the chiefs WE HAVE SOME QUESTIONS ABOUT THAT but the Ministers had to leave the moment their speeches were over. Just like pretty much every Minister at an AFN gathering ever but different.

National Chief Perry Bellegarde said much the same things the government people did—almost as if his speaking notes were coordinated with those of Ministers Carolyn Bennett and Jody Wilson-Raybould, who omg is Indigenous just like the rest of us. NatCheef B-Garde enjoys one of the warmest Crown-Chief relationships of the AFN’s history, so it was no surprise when his leather went all buttery-soft and he said dreamily that we are “in the midst of a tremendous opportunity” and that federal money is about to rain down upon us from the sky, along with big bucketsful of inherent Indigenous rights, no strings attached. The dangers, said Ency BeauGardz, are acrimony and division. Also, totally unrelated, there’s a National Chief election next year. The takeaway is that we must re-elect NC PeeBee (don’t get all dividey now, Chiefs!) and then also PeeEMJayT, so the wonderful things we have been promised will happen. In their second terms, for sure. Because. 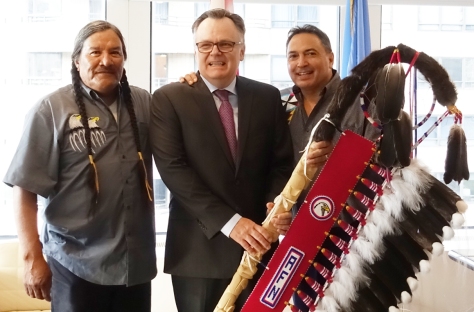 Who Wants an Eagle Staff, Yo!

No Indigenous person outside of Ottawa actually knows what the AFN has been up to over the past few years. There’s an UNDRIP which sounds like a plumbing issue (if you’re fortunate enough to have actual plumbing) but isn’t. Also the AFN wants to close The Gap, which is fine because no Indian shops there anyway. None of us can point to a single improvement in our lives and say “Thank-you, National Chief, for this wonderful [fill in the blank]” but most of us can point to something that really sucks, like undrinkable water and moldy schools, and say ruefully that nothing appears to be changing. Fortunately that is all going to change lickety-split, because there’s a new Prime Minister in town who loves us, and we know this because tears fall from his dreamy bedroom eyes when he apologizes. He cares so much that, for the first time in Canada’s history, a federal government has a plan for the Indigenous people that is going to be great for them. We are going to love it! And it’s going to be different from the past because in the past governments never came up with ideas to make the Indians better-off.

For some reason there are Indigenous people who don’t trust the government or the AFN. (No, really.) These people say silly things like “Well what’s the plan exactly?” And by people I mean, of course, dangerous radicals. One of these unhinged extremists, the AFN’s Anishinabe Elder, Elmer Courchene, suggested that the AFN Chiefs were guilty of collaboration, which he defined as traitorous cooperation with the enemy. Whoa there, cultural Marxist SJW Elder Courchene! Not only that, he accused the AFN of disrespecting elders, then brought up National Chief Bellegarde’s gifting of an eagle staff to Marc-Andre Blanchard, Canada’s representative to the United Nations. I mean, what has the world come to when a Chief gets grief simply for handing sacred Indigenous objects over to random white guys?

Then other radicals jumped in and all hell broke loose. Even the youth took shots at poor nc/pErRyB. Mark Hill, Co-Chair of the AFN’s Youth Council, accused the AFN executive of centralizing power and authority, and he reminded everyone that the AFN is a lobby group and not a government elected to negotiate on our behalf. “The nation-to-nation relationship is between our peoples and the Crown,” he shouted, while setting his hair on fire. (Not really. I made that part up to sound more radical.) NatchyCheef PeBellGeGard didn’t look very happy about any of this, but later on he reminded everyone that this is a pivotal moment for a legacy so we are moving forward with much work to do it’s the grassroots let me tell you the youth they are our future. This didn’t convince anyone, so he pulled an 11.8-billion-dollar bill out of his headdress and waved it around until it was time for everyone to go to the casino.