HEARD ABOUT Qassem Soleimani’s killing, by American drone, on Twitter—the same place where I found a National Post article describing him as (I’m not making this up) a “hugely prominent Iranian military leader and Instagram celebrity.”

Everyone could tell prima facie this was a big deal. Of course the Iranians would retaliate: the fact was so obvious, even Lindsey Graham soaked it in. Beyond that though everything was wild speculation. This attack is a diversion from impeachment; the President is going to declare martial law and suspend the Constitution; it’s going to be the Iraq War all over again. And so on, and so on. Alas and alack each and every reach for an analogous moment stretched into an era when wars were not conducted by drone and rumours of war were not arbitrated by Instagram celebrities. In other words, and in case you need to be told, it’s 2020 and not 2003.

Fox's Pete Hegseth: America can still work with allies "like the Kurds" https://t.co/2xk28sYJQb

ABOVE: One of the President’s agitprop stooges with a turd of a proposal. Last December, Trump abandoned the Kurds, and in doing so gave Syria and Turkey permission to undertake ethnic cleansing. The Kurds have watched Trump oblige dictators and would be fools to trust him.

It would be bad enough if history repeated. The American effort to bring democracy and peace to Iraq has fared poorly, to put it in the most bland of terms, but the proxy and cyber warfare that the United States is now likely to face will be even more challenging to its military and security capabilities. At the same time news of Soleimani’s death was making the rounds, a Haaretz article (Trump Envoy to Visit Israel, Discuss Middle East Peace Plan After Months of Standstill) put into my mind the terrible thought that the Trump administration will be as effective at war as it has been at peace, and for the same reason: the placing of loyalty above competence. On this principle the President has shaped the White House and the Departments of Justice and State. What does nepotism at war look like, you ask? 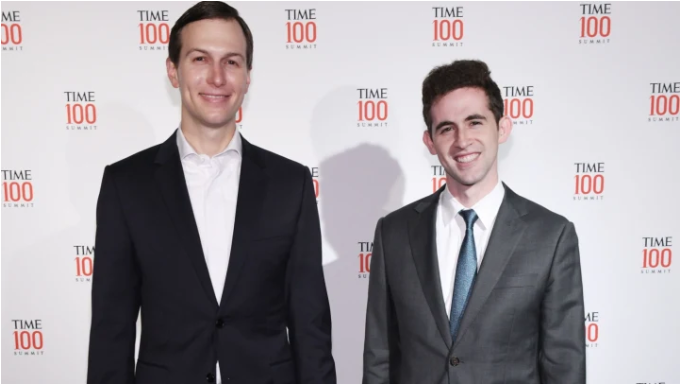 ABOVE: Jared Kushner and Avi Berkowitz, the President’s Middle Earth Peace Squad. Neither of these kids have ever had a real job.

Donald “End the Endless Wars” Trump has threatened to bring fire and fury, the likes of which the world has never seen, to North Korea. (This was before he fell in love with Kim Jong-un.) He once bombed a Syrian airstrip. Momentary reactionary rage and impulsive but pointless bombings are what he does best and indeed his only military strategy, so far as we know. If he has anything else up his badly-tailored sleeves, he’s kept it a secret. Don’t misunderstand me. Soleimani deserved what he got and, yes, war with Iran hasn’t been so much declared as it has been acknowledged. What happens next is beyond everyone, including the incompetent President. ⌾