It has the feel of a system and not, say, a series of accidents

WHEN ALBERTA’S Indigenous Affairs Minister said it was tough to watch his friend Chief Adam being brutalized in a March 10 Fort McMurray video, we knew what he meant. But he might well have said more, and been nearer the point, if he’d known to use brutalize in an earlier and now-obsolete sense: the action or process of lowering oneself to the level of the brutes. We’ve abandoned that usage, to our loss, and with it the insight that to use, abuse or degrade a fellow human being is to make of oneself a beast. Used this way the term reminds us that (for examples) the institution of slavery diminishes and perverts the slaveholder, and that the subjugation of colonized peoples debases the colonizer.

The RCMP officer who charged into the frame of a dashboard camera, to beat Chief Allan Adam, behaved brutally. And while my leap from colonization to policing will be as narrow or as wide as your leanings allow, it’s objectively the case that the North-West Mounted Police was established to put down resistance to settlement and the opening of land for private ownership and profit, at the expense of Indigenous people. This history is well-known within First Nations and its legacy is keenly felt. The 1870s was a time of westward expansion by settlers, the Trans-Canada railroad, the numbered treaties, and the Métis Scrip system—a convergence that is no work of happenstance. The RCMP, as the North-West Mounted Police would later be known, played their part by invigilating Indigenous people and enforcing provisions of the Indian Act, so much so that the Mounted Police could fairly be described as an adjunct of Indian Affairs and a handmaid of dispossession.

It all has the feel of a system and not, say, a series of accidents, with the focus upon people considered by officialdom as a race. (More specific, “a weird and waning race,” as Duncan Campbell Scott, former Deputy Superintendent of the Department of Indian Affairs, wrote in a poem titled The Onondaga Madonna.) But apparently it’s a matter of scandal and of controversy to fadge the terms system and race, in a country that to this day administers Indians through an Indian Act underpinned by a bureaucratic schema of blood quantum. The flaw of a bad apples theory of policing has been exposed by the ever-increasing scrutiny into a system that attracts, recruits, and retains some number of goons and that thereby produces a steady stream of headlines concerning the deaths of Indigenous and black people in the custody of police.

RCMP Commissioner Brenda Lucki has affirmed that the problems within the RCMP are bigger than “a single individual or the actions of one person.“ We had fresh evidence of this when the RCMP initially refused to release the video, said the officers’ actions were reasonable, and denied the need for an investigation. Only outside involvement and evidence of public displeasure seem to have brought the RCMP bosses round to the idea that an expired license plate sticker might not be an occasion for beatings.

We’ve had the bad apples because we’ve had a system that is bad-apple friendly. The problem is bigger than individuals, but the individuals who are big problems debase the entire system. One might even say that they brutalize it. ⌾ 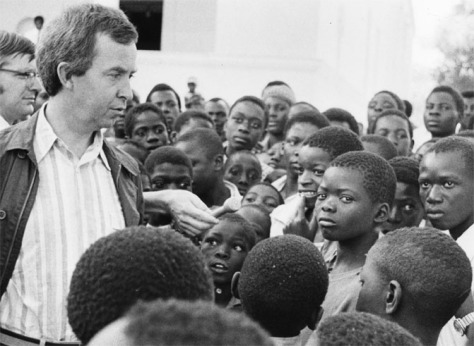 The Alberta race, within view of the ribbon, is yielding the gaffes which invariably issue from the combined stresses of mental fatigue, excitement and desperation. In the gaffe genre, there are many sub-species of misspeaking. Each fresh entry into the canon tells us something distinct.

We begin with a politician of Albertan extraction. “What is the totality of your acreage?” former Prime Minister Joe Clark once asked, addressing an indigent farmer on a trip to India. Like Gerald Ford’s inept descent from an airplane, infamous thereafter as a recurring Chevy Chase gag, Clark’s pinheaded phrasing became a metonym for his perceived signature fault: an inability to connect with the common folk and to perceive the blowing of the political winds. Rather swiftly, Clark’s tin ear for politics brought him down. (In the case of Gerald Ford, one of the most nimbly athletic persons to occupy the White House, the perception of ineptitude was well off-the-mark: but in politics perception is everything.)

Moving further afield from Alberta, Kim Campbell submitted two gaffes under the rubric “Things Which Are Probably True But Should Not Be Said.” During her campaign, she asserted that the recession was likely to go on for some time (it did) and that elections were a lousy time to discuss the issues (quite arguably true, when you consider it).

In the gaffe category of “What I Meant To Say” falls the recent statement of Calgary-Greenwood aspirant, Ron Leech. In my estimation an unfairly labeled instance of bigotry, Leech’s claim that “As a Caucasian, I believe that I can speak to all the community” confirmed certain familiar stereotypes of Westerners. Seeking his office in Calgary-Greenway (a come-lately electoral district patched together from among three previous ridings, in a 2010 re-distribution), Leech meant to say that he can win in an ethnically diverse area. Having narrowly lost in his last attempt, this is precisely his current political challenge. A “white” candidate the political version of Type O blood? This is a whack of gaffe, but hate is not a part of the package. (An aside: the word candidate derives from the Latin term “shimmering white,” describing the bright toga put on by Roman campaigners. White candidate is thus a tautology.) A better argument would have been to observe that social conservatism is the ideological home of many immigrant populations, and that Leech is nothing if not a social conservative. Oh well.

Then there are the gaffes — the ones we most cherish — which are merely humorous. In this context I recall Bob Wenman’s professed allegiance to “Judo Christianity” (which brings to my mind the so-called muscular Christianity of Henry Fielding) and Allan Lamport’s assertion that Canada is the greatest nation in this country. Such comments are usually laughed off and forgotten, but they do risk exemplifying Mark Twain’s observation that “it is better to keep one’s mouth shut and be thought a fool than to open it and remove all doubt.”

An example here is Stockwell Day, who after an initial burst of extraordinary political promise seemed bent in both word and deed toward making a proper fool of himself. His pointless attack on Lorne Goddard eventually cost the Albertan taxpayers over $700,000, and along the way he made a specimen of himself in two water-related incidents, decrying that “jobs were flowing south just like the Niagara River” and appearing on Jet-Ski for a wet suit photo-op. At first merely comical, his miscalculations and fumblings eventually split the Alliance Party, leading to the ascendance of the current, and surprisingly gaffe-free, Prime Minister.

In the final category fall gaffes of a more serious nature, as my colleague Kelly McParland has observed. These gaffes bring forth questions which can be evaded or brushed aside for only so long, for the “mispeakings” here are cases neither of comical confusion nor of political tone-deafness, but of views likely held by candidates but dishonestly withdrawn or repudiated for a home-stretch tactical advantage. In these cynical instances, the gaffes are no matter for laughter.