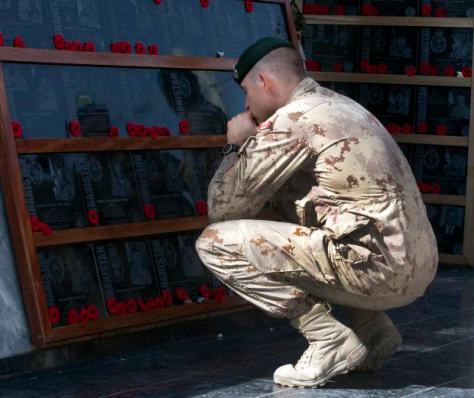 AT FIRST GLANCE the federal government’s proposed changes to the Department of National Defence’s soldier suicide prevention program is an offense against common human decency, and it doesn’t much inspire confidence that this news arrives from the Minister of National Defence, who has made headlines in recent months for indulging himself needlessly on the public dollar. The principle that Austerity Is Good For Everyone Else is a familiar hypocrisy, and on this foundation we now apprehend Parliamentarians such as Peter MacKay and Bev Oda.

Indulgence necessarily brings us to the question, Why are these under-performing lugs still warming their over-priced Centre Block seats? Why is a mediocrity and liability like MacKay able to preside over the affairs of veterans, praised by politicians when it’s a matter of expedience but otherwise under-valued, in this supposed time of cost-consciousness? Was Conservative MP Rob Anders representing the sentiments of his caucus when he fell asleep in a Halifax meeting with veterans? Perhaps Ottawa is no longer alive to the pulse of the nation anywhere. One thing is certain. To promote the interests of soldiers has been, in recent years, to know the indifference of the federal government. Speaking of Halifax: consider the five-year battle of Nova Scotian Dennis Manuge, which this week ended with a Federal Court of Canada ruling against the government’s claw-backs of SISIP long term disability benefits for disabled veterans. According to a May 2 press release of the Veterans Ombudsman, “all witnesses who appeared before us, with the exception of witnesses from the Department of National Defence, felt the reductions were indeed unfair.”

This business of nickel-and-diming those who have served in the armed forces is neither new nor restricted to Canada, but it rankles nonetheless. Mr. MacKay claims that “Canada has become a world leader in fighting the stigmatization and raising awareness of PTSD and other operational stress injuries,” but in the meanwhile his department has forced veterans to take legal action and has brought substantial grief to Canada’s Veterans Ombudsman Guy Parent, on issues ranging from denied claims for the Agent Orange ex gratia payment to decisions made by the Veterans Review and Appeal Board. Now, despite the Department of National Defence’s acknowledged priority of post-deployment PTSD treatment and suicide prevention, the politicians appear to be offering little more than vague platitudes and assurances of commitment.

It’s not only bad politics to deny services to disabled and distressed veterans, it’s bad policy. As bad policy, the government’s ill-considered parsimony undermines the relationship of trust and reciprocity between those who serve and those who are served. As bad politics, this instance of mealy-mouthing and short-changing makes the Harper Government look distant from, and unresponsive to, Canadians of every variety. But these are matters for Canadians themselves to weigh — and, Mr. Harper, you can be certain that they will. 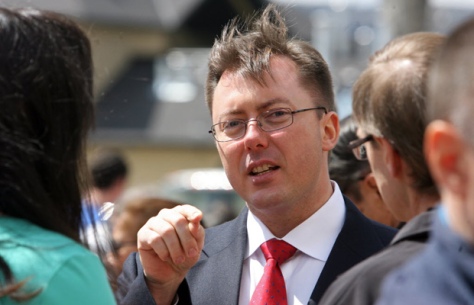 SURVEYING the decade and-a-half career of the Member of Parliament, Rob Anders, I become the zazillionth person to note this Member’s principled objection in 2001 to making Nelson Mandela (by his measure a terrorist and Communist) an honourary Canadian citizen. By all means, debate the tactics of the ANC amongst yourself. In more recent times the riding news section of his personal website has been rather thin, not much by way of accomplishment or effort having been reported since last June. Other than his work of defunding the CBC and rebuking the Communist regime of China — in this latter effort, he and I have something in common — Mr. Anders’s CV is notably light. In the past year he has earned headlines by falling asleep twice on the job, something he tells us is the result of a car accident.

In February, Rob Anders arrived late to a Halifax meeting with war veterans who had assembled to inform the government about homelessness and emotional unwellness among former Canadian soldiers. I’ve met and on several occasions corresponded with the one-time Canadian Lieutenant-General and present Canadian Senator, Romeo Dellaire, and from this extraordinary man I’ve learned about the reality of war and trauma and post-traumatic stress disorder as well as the many other sordid human outcomes of organized human slaughter. When people who have seen combat in Rwanda and Bosnia and Afghanistan and other such hellish places speak, it is as a general rule a time to pay attention. Mr. Anders, unfortunately, fell asleep. And when his audience and government colleagues confirmed that this was so, Mr. Anders tumbled into attack mode and tossed about paranoid and bigoted insults.

Rob Anders has been a back bencher embarrassment for over a decade now. The Conservative Party of Canada has been careful to keep him ensconced, a media-proof fence around him. Anders’s longevity appears to be principally the effect of Albertans’ sincere and bone-deep anti-Liberalism, and I suspect many conservative Calgarians would happily vote for less cockeyed and more effective representatives, if only Ottawa would allow them that option. For reasons unknown, however, the party has actively suppressed Conservative challenges to Anders, making of him a sure and comfortable candidate. A shame, that. The man is a mediocrity and, for many a Conservative voter, a hold-your-nose lesser evil. Now there’s an effort afoot to empty his Standing Committee on Veteran Affairs seat for occupation by someone who brings an active interest to the job. Amen.

By way of parting, I leave you with an observation. In February 2012, Rob Anders arrived quite late to a meeting and promptly fell asleep during a discussion of homeless veterans. In November 2011, he fell asleep in the House of Commons during a discussion of inadequate housing in Attawapiskat. In July 2011, compelled by his job to read a government announcement on funding for affordable housing, Anders registered his irritation at this federal initiative. He attached an “I’m Supportin’ Morton” button to his lapel (Morton was a Calgary politician running in a local race), and informed his audience that he would utter a catchphrase each time his speech contained something with which he was “uncomfortable.” You’d have to admire this sticking it to the boss, if it weren’t so pitiful and childish and passive-aggressive. He lacks even the courage of his convictions. After this week’s antics, Mr. Anders’s credibility is paper thin. Perhaps he should yield his committee seat to someone with demonstrated interest in, and appreciation of, the needs of Canada’s war veterans. They deserve it.