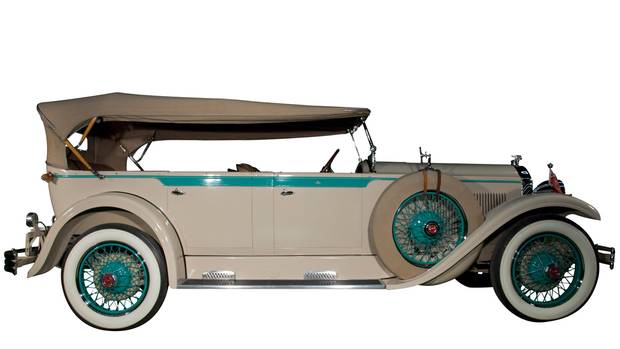 IN OUR AGE of traffic congestion and global terrorism, we’ve forgotten the time in which the prospect of travel by automobile or airplane summoned notions of luxury and elegance. The author Peter Pigott, who has produced a number of books on these and other modes of transport, rehearses in his “Royal Transport: An Inside Look at The History of British Royal Travel” the long and intimate relationship of British royalty to the Canadian made McLaughlin-Buick — one of which is soon to be auctioned in the United Kingdom.

Enniskillen blacksmith Robert McLaughlin entered the manufacturing industry in 1876, producing horse-drawn carriages at his Oshawa based McLaughlin Carriage Company. In the early 1900s, two of his forward-looking sons would steer the company into the nascent automobile business (and a third son would invent Canada Dry ginger ale). In 1907 Sam McLaughlin struck a partnership with Buick’s William Durant, a move that provided Oshawa with powertrains and Detroit with McLaughlin’s superior craftsmanship as well as duty-free access to the Commonwealth consumer market. In 1918 this partnership yielded “General Motors of Canada Limited and McLaughlin,” later known simply as General Motors.

In the early days of the automobile age, the royal tour was already an old institution. George V regarded it as a way to occupy his vain and dissipated son, the future Edward VIII. For the August 1927 visit to Canada of the Dukes of Windsor and York, the Oshawa General Motors factory produced two 1928 McLaughlin-Buick Royal Tour Cars, the engines having come from Flint, Michigan. Able comfortably to accommodate seven passengers, these behemoths were painted sand and turquoise and featured lizard skin upholstery and nickel plated bumpers.

In late 1936, when Edward VIII’s abdication had become public knowledge, the Canadian made McLaughlin Buick Roadster in which he and Wallis Simpson were photographed was a piece of the scandal. In the minds of many British, the King’s patriotism fell well short of the required standard — a charge that would be abetted by perceptions of the couple’s fascist sympathies. (Pigott further notes Edward VIII’s fondness for Daimlers, which he generously terms “ironic.”) Despite what was once McLaughlin’s slogan, “It’s Better Because It’s Canadian,” the Oshawa Buick was widely viewed in England as an American product. The connection of the American socialite Simpson with the American automobiles of the King was made by Simpson herself, in a memoir entry following a visit to her future husband’s family and reported by Peter Pigott: “I left with a distinct impression that while the Duke of York was sold on the American station wagon, the Duchess was not sold on David’s other American interest.”

Here I cannot resist this trope of the American interest. Much has been made of the distant green light of F. Scott Fitzgerald’s The Great Gatsby, but one could argue that the automobile figures more prominently in this novel of the automobile era. Jordan Baker’s comment about careless driving — “it takes two to make an accident” — foreshadows the death of Myrtle as well as Nick’s eventual disillusionment with, even contempt for, the social class of which Daisy and Tom are representatives:

They were careless people, Tom and Daisy — they smashed up things and creatures and then retreated back into their money or their vast carelessness, or whatever it was that kept them together, and let other people clean up the mess they had made.

One can read Simpson’s memoir and discern the very treatment of the automobile that it receives from Fitzgerald, as a symbol of social attainment and the cardinal American virtue of freedom. David [Edward VIII], she writes, is “all enthusiasm and volubility” over his McLaughlin, a phrase that could well have been penned by the creator of Nick Carraway. And by means of coincidence, Simpson may be connected to Fitzgerald via Felipe de Espil, Courtney Letts and Ginevra King — the latter with whom Fitzgerald had a romantic relationship and from whom he drew the inspiration for Daisy Buchanan.

In their subsequent visits to Canada, the royal family would tour in custom made McLaughlin-Buicks, the production of these cars ceasing in 1942. Perhaps the most admired among collectors is the Royal Tour Buick which carried King George VI and Queen Elizabeth across the country in 1939. This fell into the hands of a private collector, as for a time did one of the 1928 models. Sam McLaughlin lived to be one hundred, and the Oshawa General Motors plant operates to this day. Much like the royal family itself, the automobile age goes on, although perhaps with its prestige diminished.