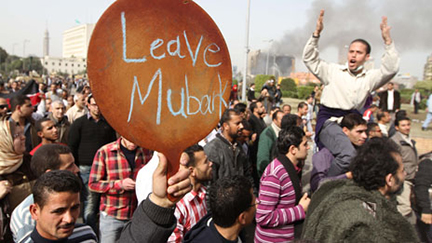 IN A MAY 2013 Ahram Online interview, the US ambassador to Egypt, Anne Patterson, fielded a question about her government’s delicate relationship with the Morsi regime:

The fact is [the Freedom and Justice party] ran in a legitimate election and won. … Of course it is challenging to be dealing with any new government. However, at the state institutional level, we are for instance still liaising with the same military and civil service personnel, and thus have retained the same long-established relations.

One month later, footage of Tahrir Square brought to the world an outpouring of hostility, aimed at Ms. Patterson and President Obama. Why, ask the Egyptian critics of Morsi, did Obama keep up the flow of money and other material supports, as the Freedom and Justice Party undertook to replicate the authoritarianism of earlier regimes? Or to put it another way — the way Patterson did — why did the American government “retain the same long-established relations”?

The answer is almost too obvious to need stating, but I’ll put it as follows: whatever may have changed within Egypt, nothing of substance has altered where the world’s geopolitical interests and machinations, involving Egypt, are concerned. We may forget this as we apprehend the extraordinary — an Egyptian government assuming power through a legitimate election and a popular mandate. All around Egypt, however, remains the ordinary, and this goes a long way to explaining the current mess in that country.

Egypt’s political history begins with the Pharoah and stretches across centuries of foreign and autocratic domination, into the modern era and the Muhammad Ali Pasha dynasty. Already by the third quarter of the nineteenth century, if not earlier, the familiar elements of today’s Egypt were established: the centrality of the modernized army, the interference of outside governments, poor domestic economic stewardship and mounting indebtedness, and the growing resentment of Egyptian citizens, inflamed over the subversion of national interests by corrupt and incompetent collaborationist regimes. Over and again, from Tewfik Pasha to King Farouk to Hosni Mubarak, political transition was effected by the military, most and usually all of the above considerations in plain evidence.

The demand of the Egyptian voter for a democracy reaching beyond the Ambassador’s benchmark of “legitimate elections” can be fairly characterized as fair enough. When Patterson noted that her government was retaining “the same long-established relations,” how clumsily this must have fallen upon her Egyptian audience. The worst aspect of what for her must have been an innocent comment was how accurate and true it was. The United States has indeed long been having “relations” with the Egyptian military. Before that it was the British and French, and before that it was yet other foreign powers. Not very long ago at all, and for a good long while, political transition was a job of the army, and the players of the Great Game had written the job description. Seen from this perspective, Egypt’s Arab Spring revolt is less a revolution than a complication of a long-standing relationship behind which are long-standing interests.

The American government’s support of Morsi has yielded charges within the Tamarod, or rebellion movement, that President Obama supports the Taliban and al-Qaeda. What the American government however supports is the party in power: and let us not forget so quickly that his power originated in the 51.73% of the vote Morsi obtained in his run-off competition with Ahmed Shafik. (That some of this vote may have been bought with extravagant and impossible promises only underscores the fragile nature of the achievement.) The Obama administration on several occasions over the past year waived the rules that link aid to democratization, not out of deference to the Muslim Brotherhood but as part of this business of long-established relations.

Egyptian politics clings to this matter of the status quo, with only one important exception: the Egyptian voter. Not for them, the perfunctory liberalism of the voting cycle. They want to see results — in the country’s abysmal economic performance (a non-performance, really) and political culture. The Freedom and Justice campaign slogan “Islam is the answer” might seem an instance of pandering, but who can doubt they meant it. In the crucial matter of economic renewal, Islam’s answer was to call the 1.1% interest rate of a controversial $4.8 billion IMF loan a “loan processing fee,” thus cleverly getting around Islamic law’s forbidding of usury. Once secured, this loan was to open the way to other forms of international state welfarism, kick-backing and bribery, also known as the long-standing relationship.

Meanwhile, many millions of Egyptians live at subsistence, trapped in a wrecked economy which depends upon tourism and the handouts of the US and several Gulf states. Egypt is the world’s leading recipient of US taxpayer dollars, most of which go to the bloated and corrupt but useful military establishment. In exchange, the American government secures workable relations with a large and historically influential Arab state, strategic military access to Egyptian territories (principally the Suez Canal), and diplomatic leverage in the levant — all of them serious considerations and nothing to sneer at. The current funding formula goes back to the 1979 Camp David negotiations, which were themselves necessary because Henry Kissinger had eight years earlier refused to endorse an Egyptian offer of peace with Israel in exchange for the latter’s withdrawl from the Sinai. Through this arrangement the US taxpayer subsidizes the two largest and rival armies of the region, in service of the hope of maintaining as far as possible the long-standing and preventing the next conflagration.

Perfectly adapted to this political niche are the hypocrisy and cynicism of Egypt’s leading political parties, many of which were formed post-Mubarak. The country has over thirty, among them liberals and socialists and Nazi and Salafist. The debate over the role of religion in politics, overemphasized in Western media, overlooks the obvious fact of how similar Morsi and his Islamist colleagues were in their economic and political performances to what had come before. Political Islam failed in Egypt because the general political culture of the country is itself failed, from the democratic perspective. It is entirely dependent upon outside support and captive to graft and opportunism and corruption. No wonder that millions of Egyptians are taking to the streets. They are ready for democracy. If only the politicians could say the same.