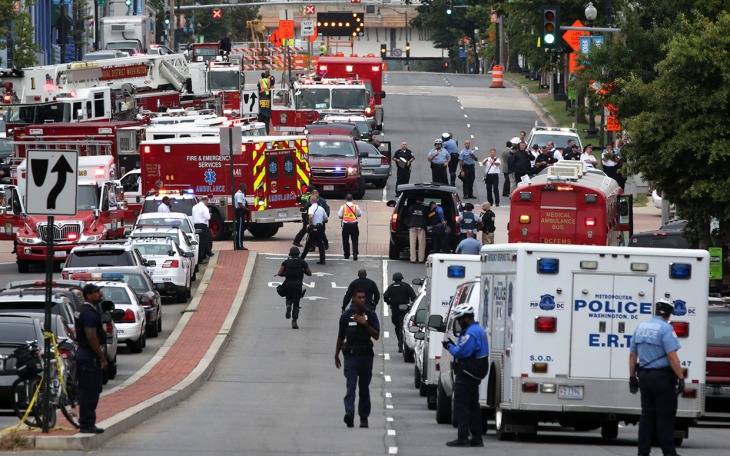 WILLIAM MARSDEN observes today, in a Postmedia article “A touch of socialism might tame America’s killer psyche,” that

Murderous rampages have become so commonplace in America they have reached a level of banality that has earned them their own massive, militaristic and bureaucratic response system. The shooter opens fire. Police “active shooter” squads — on call 24/7 — are deployed. The shooter either commits suicide or is shot dead. The police are declared heroes. The victims are mourned and become “patriots.” Their family photos drift ghost-like across TV screens. Friends of the shooter struggle to comprehend why such a good-natured guy would do such a terrible thing. Blame inevitably falls on, as the Chicago Tribune ruled in an editorial Tuesday, “a lethal grudge and a gun.”

There is no repudiating that the mass killing of strangers in crowded public places is a template act, from beginning to end scripted and carried out along known and predictable lines. For years the question Why? has necessarily occurred, under the assumption that a coherent explanation is available.

As Marsden notes, “this is an American phenomenon” as well as a male one. But of course for years terrorism was taken as granted to be the work of uneducated Muslim men living in places of deprivation and political corruption: this way of thinking was subject to revision when middle class north americans, including in some cases women, took to the business of ecstatic violence. Of course it may be that the random mass shooting is a necessarily American proclivity, but equally likely is that as in so many other things the United States is simply ahead in the creation of a cultural phenomenon.

The proposal that mass shootings are American in nature begins and ends with something like the following: America is a country with an individualistic and revolutionary history, in which the idea of redemptive violence plays a central cultural role; as community bonds yield to economic and social erosion, a few lost and isolated individuals turn to violence to assert themselves and to strike back at the invisible yet all-encompassing forces of which they perceive themselves to be the victims.

Notice that invariably the “Americanness” of something is explained by recourse to improvised sociological data which at bottom are human developments that may be observed around the world. There is nothing especially American for example about violence or economic decline or even gun ownership. However, in most countries where the skin of civility has ruptured, one encounters behaviour ranging from petty gangsterism up to confessional street warfare and campaigns of genocide. The society falls as one person, or at the very least there is a generalized political and economic failure.

What is remarkable about the American instances of civil violence is how they occur among shiny buildings and blue skies, often only blocks or perhaps feet from the steps of posh storefronts. Every day underclass children are murdered in the parks of Chicago, in plain sight of the glittering skyline, and from the neighbourhoods harbouring the very depths of despair to the centers of extraordinary privilege it is a five-dollar taxi fare. In most other places in the world the mass shooting of strangers goes by the term civil war or jihad or insurgency. In any case the killing usually gets underway with the very sort of grievances that we are informed are unmistakably American.

The chief impediment to the conversation is the inadmissiblity of certain topics. One is the possibility that random acts of violence do in fact guarantee observable achievements, whereas conventional avenues such as going to school or voting are at best crapshoots in life’s struggle for success and recognition. Most of us are instinctively repelled by the suggestion that murder “works,” but if you have spent the bulk of your life throwing your dreams into a bottomless hole, feeling yourself to be an empty and impotent cipher, you will have at least noticed the larger-than-life canonization accorded to those who departed in a rain of bullets.

As I have suggested already, one can arrive at social utility and meaning in so many ways – by inventing a software company or curing a disease or raising a family. However the fellow of average intelligence and skill who has plied the alternatives and to no avail will have the fame and historical eminence of a Bill Gates or a Mick Jagger if he takes up the campaign of murder. Few feel they are able to say so, but who can deny that this is so? Related to this is the unspeakable fact that we all in some measure want our lives to “matter” and that we can sympathize with the bitterness of those who get their comeuppance in a nonetheless repulsive act of violence.

The preceding assumes that every mass killer is a self-judged loser, having failed on his own terms to have fulfilled the necessary conditions of a succesful life. Even if that were so, in any country, whether capitalist or communist or other, there must be at any given moment thousands if not millions of people who feel this way. The objective fact is that most Americans are “losers,” if by winning one takes the commonplace capitalist ideal of slaughtering the competition to finish the race at number one. Success in a capitalist society must be arrived at by non-capitalist means if the majority of people are to reconcile happily with their lot. Only those who take the ideals of the culture as given will arrive at actual wretchedness. Further, while there is nothing uniquely American in the idea that a life should be lived before an audience, America has furthered this notion with more vigour and completeness than perhaps any other nation. Indeed in the reality show and social media, the cooperative and shared culture of mid-century small-town America has found its reconstitution. Connecting now means exchanging bits of data across digital infrastructure, and community means a collection of followers and admirers whose principal purpose is to consume one’s feed. The old world of tangible objects and coffee hall chatter persists, but it is increasingly in any case for the old. For the rest, there is the impossible idea that you must finish first and to public applause, a piece of nonsense most of us manage to put in its place.

One should keep firmly in mind that mass killings are extraordinary and thus likely in no way representative of the average person’s inner life. But to dismiss each act of random violence as an instance of “mental illness” is to shut down the conversation. It may be that an improved mental health system could reduce the number of these incidents, and to me at least it seems like a good point at which to begin. What is curious is that we are informed by crime statistics that the rate of violent gun-related crime in north america has been declining since the 1970s, whereas the rate of anomalous mass shootings has been increasing. In other words, the act of killing itself appears to be subject to some process of evolutionary development — a fact that suggests an underlying logic. Until we understand exactly what the killers believe themselves (quite possibly correctly) to be getting out of this, we will be ill-equipped to act in a useful and positive way.