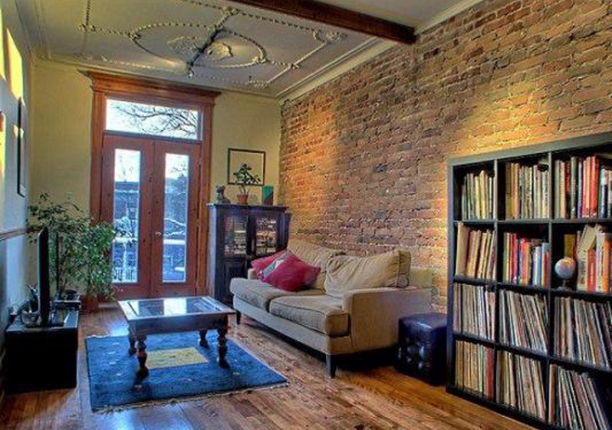 YEARS AGO, there was a subject in my high school that was called Home Economics. There may still be such a beast out there, for all I know, but in any case it was a discipline mandated for the girls, so I never experienced it. In the field of domestic science, I’m entirely of the self-made category of man.

Home Economics is, as any student of Greek will know, a tautology. The word economics contains within it the oikos, or house, and its nomos, or management. Thus, home economics means “home home management.” Were any of my teachers literate enough to arrive under their own steam at this little joke of mine? That’s a question I’ll never be able to answer: but I have my suspicions.

It’s a shame, for a good many reasons, the girls had the domestic science all to themselves. When I had my first household – and here I exclude the apartments which I shared with roommates, during my college years – I took great pleasure in managing it.

The first challenge is to find an oikos of your own. As a student, I sought out the older buildings with character and charm: apartments with Victorian woodwork and curious details like ornate wall sconces and those metal fixtures stuck into the ground, near the entrance, on which you’re meant to scrape the horse dung from your shoe. A working fireplace, with a properly maintained chimney, was always top of my list. Some of the places I rented retained the fixtures from the days of gas lighting, as well as other types of architectural obsolescence. Montreal in particular is a mecca for the massive, leaky, shabby-chic apartment still firmly in the 19th century. I’d never want to own one, but as a student these places had their charm.

Once in, I scrubbed everything clean, top to bottom: woodwork, appliances, walls, baseboards, light fixtures. It never quite felt like “my” home until I’d gone through this admittedly neurotic ritual of mine. But once I had, I could get down to the work of furnishing a personal space, which is itself a kind of art. Books figured heavily in this exercise – both the necessity of their storage and the requirement of interesting and inviting places to read them. Then there’s the more social business of food and drink. One of my first decisions was to find a table that could be broken down into several leaves, so that it would accommodate up to ten people comfortably. Or, it could be a small round table. I found just such a table at Turk’s, in the early 1990s, and today it’s the Roundtable at which I record my podcast.

As weird as it sounds, I got a lot of pleasure out of the routine work of house cleaning. There’s nothing quite like the smell of Murphy’s Oil, for example, and the routine of applying it to furniture and floors was for years a kind of Zen exercise. I kept a well-ordered and impressive household, if I may say so. A place for everything, and everything in its place. Clutter and knick knacks and excessive consumerism and “stuff” were my sworn enemies, and I followed something like William Morris’s injunction “to have nothing in your house that you do not know to be useful or believe to be beautiful.” It was a pleasure each day to plan a meal, to walk to the local butcher and florist, to find just the right wine, to waste away an evening with dinner and friends, and to enjoy the pleasures of home.

As I’ve said, the careful planning and maintenance of a household is an art. It should be a pleasurable art, but of course what I’m describing is hardly the experience of most people. And I understand. I look back, and I see the gradual but unrelenting acquisition of objects and the costs of maintaining them. The pleasures of simplicity have yielded to the burdens of complexity. But this is not entirely a negative thing, or at least not the result of bad impulses. When I was a bachelor I had a simple life, but I wouldn’t go back to it now. A family life is invariably messier, in every sense of the word, but it’s also richer, filled with interests and work and diversion. Also, it’s the case that the cultivation of a home, when you have children, involves great drudgery, such as the ceaseless picking up of someone else’s underpants, etc. That can make the management of a household into a kind of indentured servitude, as opposed to the cultivation of one’s little enclave of comfort and order in the world.

Lately I’ve been thinking about this domestic science Golden Age of mine, the era when I positively enjoyed keeping a household rather than viewed it as a task to bear. What happened? Well, the obvious answer is that I arranged my affairs so that I was cohabitating with other people, and, more to the point, jostling with a great deal more stuff and the pressures and irritants that come with this. But this seems an imperfect explanation. Probably the more truthful answer is that the idea of a “home” as anything more than a holding pen for one’s material possessions, and a place to pass the time when one isn’t out in the world, has been forgotten or left uncultivated over the years. This is the world of busyness, work schedules, and the tide of life drifting into its level.

Just as bachelorhood is a phase, so too that period of unrelenting chaos when little people stomp around your space, putting swallowable objects into their mouth and recreating the art of Neanderthals on your grandmother’s heirlooms, with layabout Sharpies. We can laugh now. I have one friend who seems to me to have navigated through this, and other such eventful phases, without ever losing her touch, to say nothing of her mind. A home should be a place of peace, personal creation and recreation, and repose. It’s where we should see our best selves expressed and reflected. There’s no reason in principle why dynamic, passionate and complex people should live in tidy spaces. Chaos has its place, too.

Home, I conclude, is a work in progress – and it doesn’t simply happen once and for all time. It has to be deliberated, and it requires care, consideration and cultivation. When more than one person is involved, negotiation is a necessity. In the absence of a domestic science, one ends up with a mere house, filled with unnecessary and perhaps even distracting stuff. We would do well, I think, to keep William Morris’s advice in mind. A household should be useful, but it should also be the personal canvas where you make your art.