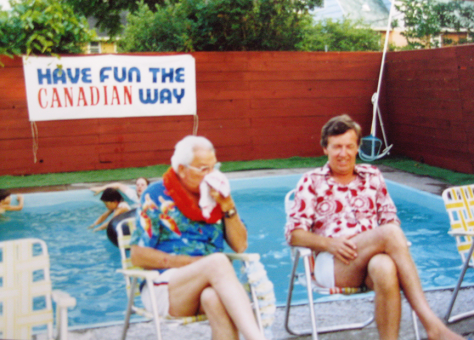 HE WAS, quite simply, one of the most remarkable people I’ve ever known.

Always Uncle Al, never once Albert, married my mother’s oldest sister. He was Italian, which meant that my Aunt Rhoda learned to cook a killer spaghetti. Sometimes I’d go along for the ride to the bakery beside the river where he bought the fresh Italian bread that would always be on the dinner table. So many of my memories of him involve food and family, and of course that’s the stereotype of the Italians, as well as the truth. There was no questioning Uncle Al’s love of family and food, as well as of life.

So many stories. He was a super-hero to me. Working class, he owned two of the same car (always a Ford) but in different colors so he knew which was his and which was “Rhody-pants’.” One day he showed me that his right thumb was longer than the left from years of hammering. He had what seemed to me a magical ability to fix things, and for years he earned his bread by repairing fridges all across Buffalo.

He couldn’t have had that much money, and yet to this day I’d say he was the richest man I ever knew. He had a basement rec room with a well-stocked bar, a pool table and a working jukebox. My cousin Paul and I would always choose the Rolling Stones’ “Bitch,” amused by the conceit that we were getting away with something illicit. Uncle Al would usually be at the end of the bar with his Armenian friend Wally. They’d talk about the government and politics, and Wally, who would slowly amass a small fortune through old-school hard work and frugality, before dying in his fifties, would shrug like a man who had shared a bar with Noah. When Uncle Al had to take a piss, he’d walk to the corner of the room, opening the closet door where the sump pump was. Then he’d piss into the sump pump reservoir, like a freaking rock star.

He had a pool in the back yard where the family wasted away the summer hours. Most of my many cousins would be there –—Alan Jr., Tim, Dave, Paul, Debbie, Patty, Lori, Dara, Susie, John, Nick, Kari, Kail, Joanne, Scott. And Mark, who was the youngest of my mom’s eight siblings and the same age as my oldest cousins Skippy and Jimmy, which made him an honorary cousin. Throughout the 70s and early 80s, the extended family lived at Uncle Al’s. In the winter we played cards and shot pool, and we finished puzzles and listened to music. Back then my Aunt Rhoda was one of the funniest, most crazy people I knew. She was loud and brash and foul, in the best way. There was nothing she wouldn’t say: her humor was fearless. And as if that wasn’t enough, she had a twin, Betty, who was the same.

He had two set pieces. The first was “what Rhody-pants wants, Rhody-pants gets,” and the second was that he could fit everything he truly owned in a shoe box: the rest was Rhoda’s. I only saw him put a foot down once, in an argument with Aunt Rhoda over money. He walked to the trash, put up the lid with the foot lever, and threw a handful of bills into the bin. “I’ll do with my money as I please,” he said. His wife carped and rebuked and protested, but he refused to let her reclaim the money. To this day I don’t know if it went to the curb, but I never heard Aunt Rhoda raise the subject again. Nobody ever silenced Aunt Rhoda: she was an opinion machine with a broken filter and a loud speaker built right in. So I figured, and he must have too, that this was money well spent.

It’s astonishing what I’m remembering as I write this. Long submerged images re-appear in the already crowded pool of the mind. I recall the magazine I started in the basement rec room, and the day my Uncle Al took me aside and gave me the gift of a sweater, for no particular occasion, telling me I was his favorite nephew. I have so many memories of that Bardol Road house, just down the road from where my grandparents had once lived, that I find it hard to believe I never lived there myself. Sometimes I would spend a night. I’d know the moment my aunt and uncle were awake, by the smell of their cigarettes. A few minutes later they’d be in the kitchen, brewing coffee. Uncle Al would putter, always in a short-sleeved dress shirt, a cardigan, slacks and slippers. Always with a handkerchief at the ready.

The day my Uncle Al died, suddenly and unexpectedly, the world changed. Everything fell to pieces. At first, this went unnoticed. We mourned — together, as a family — in his home. We lived for a brief time in the sombre, transitional afterglow of a lapsed era. Gradually we depleted the well-stocked coolers that Uncle Al had meticulously and quietly maintained, for our pleasure, on his humble earnings. The jukebox was silenced. We said little. I remember my cousin Kail weeping until the veins in her face ruptured and she appeared as if savagely pummelled. I was terrified by this grief and what it might do. Uncle Al was the first member of my extended family to die, and I had no idea what this meant.

As bad as this time was, things only got worse. The open evidence of grief and pain receded, and the more subtle and insidious nature of the wound, the loss, and the fracture set in and spread. The sun rose on a day from which, henceforth, I’d no longer collect memories of my Aunt Rhoda’s riotous laughter. My cousins drifted away into their separate lives. We no longer congregated at the pool. In later years I’d look back and recall these words of Yeats: “Things fall apart; the centre cannot hold; Mere anarchy is loosed upon the world.” I am weeping as I write these words, not for myself but for the idea of a loss that is almost incomprehensible. My Uncle Al was a force of nature, a gravitational pull, a harbour. Did we understand, while we still had him among us, that he was quietly, steadfastly keeping the family whole?

Once he was gone, poison seeped and pooled into the vacated nucleus. The family fractured and bickered. We formed camps. We lost touch with one another. In short, we were no longer a family at all. In the years and decades that survived him, my Johns memories are umbrous and desaturated: I recall little that is wholly uninfected of innuendo, acrimony and mere human failure. Divided we both stood and fell, and if I ever saw my cousins and aunts and uncles assembled again, it was at the funerals that arrived with a steady and quickening frequency. So much mere, sad, useless human failure. And above all the depressing contrast of those years when we were all young and beautiful and so full of life with what came after — the eternal snickering Footman, holding our coats, one after the other, as we expired in our respective cities.

Would things have gone differently, had my Uncle Al not died when, and as, he did — and could another trajectory have even been possible? I doubt this. In all likelihood his passing only hastened the inevitable. I may well be mythologizing an event that merits no such larding. On the other hand, I’ve had decades to reflect and revise: yet the passage of time only bolsters this personal truth of mine. I’ve no doubt that my Uncle Al was just as remarkable as I remember him, and that the bright and happy stills of my photographic memory recall something that was real, and that went away when he did.