ILLIAM MARTIN, author of A Prophet with Honor: The Billy Graham Story, says Franklin Graham’s relationship with President Trump “will come to embarrass him.” But for that to occur, Mr. Graham will need the capacity to feel embarrassment, for which there’s no evidence. 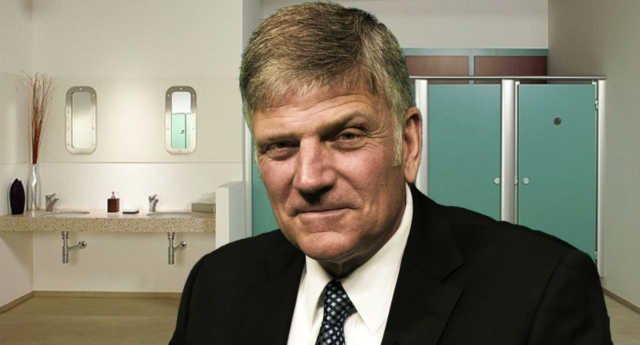 During the funeral of his father, Franklin reminded his audience how humble the man had been, and that he would have disapproved of the attentions given him on the grounds of a 40,000-square-foot museum dedicated exclusively to his life and work, and no one laughed. Nor did the obituaries delve, as far as I’m able to tell, into the origins of this tourist trap, ludicrously called the Billy Graham Library and set up by Franklin to further milk the lucrative family brand by exploiting the memory of his dead parents.

The backstory of the Billy Graham Library tells you everything you need to know about the vile money-and-power-grubbing charlatan who now controls the $300M “non-profit” and tax-exempt Billy Graham Evangelistic Association, or BGEA, and its annual revenues in excess of $100M. Franklin Graham had the idea for the compound in 2001, and it soon became the occasion of a bitter family struggle in which he prevailed. A family struggle, because Franklin’s plan required the burial of his parents on the museum’s Charlotte, North Carolina, property, in violation of the wishes of his mother, Ruth Graham.

Ruth and her son often engaged in power struggles, and as a child, as now, Franklin was stubborn and aggressive. This was no different. Once Billy had transferred control of the BGEA to his son, Franklin took his proposal to the city and leveraged an eventual family shrine for a sweetheart deal on 60 acres of land adjacent the Billy Graham Parkway, where the business headquarters and Billy Graham Library now reside. BGEA then received funding for the Billy Graham Library, including $1,000,000 from The Charlos Foundation. (Franklin has arranged his affairs in a way that allows him to pay for nothing and to profit from everything.)

The Graham siblings denounced Franklin’s proposal, calling it tasteless and tacky and little more than a tourist trap and money-making operation, beneath the dignity of their father’s reputation. One of the daughters referred to the Billy Graham Library as The Cracker Barrel, and Ruth denounced it is as a circus. The conflict-averse Billy audited these views but refused to participate, saying only that wherever Ruth ended up, he would be buried by her side. And so it was. Billy Graham announced the final resting place of his wife on June 13, 2007, at the point when she no longer had the physical capacity to speak on her own behalf, or to object. “I know this goes against my mother’s wishes,” Ned Graham was quoted as saying.

All of this, and much more, is detailed in a December 2006 Washington Post article, “A Family at Cross-Purposes,” by Laura Sessions Stepp. From Stepp we learn that, while lucid, Ruth Graham was clear that under no circumstances was she to be buried in Charlotte. Her wish was to be interred where she had lived for many years, in the mountains, but Franklin had his scheme and would not be thwarted. Because he controlled the family’s resources, and because his personality tends toward dominance (like the grifter President he so often defends) Franklin bludgeoned his siblings, and likely also his father, into submission. Ruth Graham was buried on the grounds of the Billy Graham Library, aka the circus, on June 17, 2007, nine days after its opening.

And a circus of a kind it is, a heavily subsidized, “40,000-square-foot experience” and Disney-styled cash cow—in this case, a singing animatronic cash cow who welcomes over 200,000 visitors each year along their “Journey of Faith” through the museum and toward Ruth’s Attic Bookstore and the Graham Brothers Dairy Bar. (One of the Billy Graham Library’s designers, ITEC Entertainment Co., is unsurprisingly a theme park contractor who has done work for Disney.) The website billygrahamlibrary.org helpfully informs prospective visitors that cash, personal checks, American Express, Discover, MasterCard, and Visa are accepted. Admission is free, but donation boxes are located in the lobby for those who want to subsidize Mr. Graham’s paranoia, hate, cultural warfare, and generous annual compensation, which ranges from $880,000 to over $1,000,000.