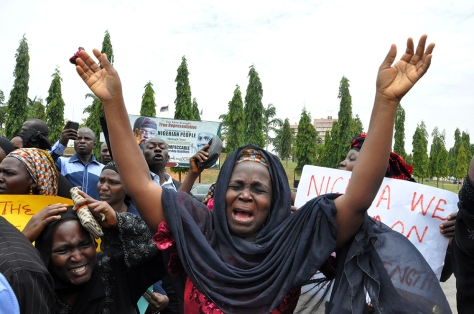 AS I WRITE THIS, the swell of a Western grassroots outcry against the Nigerian outfit, Boko Haram, appears to be forming across social media.

I’m reminded of the late ‘90s – long before Twitter and Facebook – when progressives took to mass emailing of the crimes being committed by the Taliban, first against the Buddhas of Bamiyan and then against the women of Kabul. That’s always the order: as the German poet Heinrich Heine put it, wherever books are burned the immolation of people soon follows.

Just so, for example, the SS raided and destroyed the library of the sex education pioneer Magnus Hirschfeld’s Institut für Sexualwissenschaft as one of its inaugural acts. It’s not necessary for me sketch the well-known crimes that then followed – I’ll note only that the term Holocaust refers to the literal act of burning.

But there’s another, more specific aspect of war crimes which it is necessary to emphasize, and that’s the use of sexualized violence against women as a tool of war. When the Russian army arrived at Berlin, in April of 1945, their anger at Hitler and the German army took the form of mass, systemic rape, whenever possible before the helpless eyes of husbands and fathers. Rape as an instrument of terror is neither new nor geographically specific: it’s happening at this moment in countries across the world, most notably Syria and Uganda. And, I need not remind you – but here I am doing just that – Nigeria.

Can we all agree to stop using the phrase “the forcible sale of women into marriage.” Church bells and nuptials this is not. It’s profiteering from rape in a triple currency which is simultaneously economic, military and psychological in nature. For this reason, violent sexual crime against women and female children is an international menace, and thus should be treated as a high-priority category of war atrocity.

The anti-science and anti-secular degenerates of Boko Haram have posed no special threat to the West (so far), and yet anti Westernism is at their core. Although these Islamic militants are sometimes remarked for their refusal to mix among the infidel, the phrase Boko Haram is itself a mixing of Western-Hausa and Arabic elements, and may be translated “Secular Education is Forbidden.” Boko is the term for the Latin-based writing system introduced to Nigeria by Europeans, so that the word constitutes a synecdoche, or holding bag, for all that is of the West. Haram, the opposite of Halal, designates all that is forbidden by Allah, and you will hear the word used both in casual Arabic and Hebrew conversation to mean “that’s a shame.”

If the slogan “Secular Education is Forbidden” sounds distinctly familiar, you will appreciate that some years ago Boko Haram chose “Afghanistan” as the name for its Kanamma base of operations, which brings our discussion around to the point at which we began. In 1999, the commonplace and lazy, leftist slur was that America would never intervene in Afghanistan because – wait for it – there is no oil to be had. (America eventually did intervene, and the same people then said it was only on account of Bush’s interest in a Caspian Sea pipeline! How do win against logic like that?)

As it happens, Nigeria does have oil. But even the most preposterous of the anti-war warriors can’t be bothered to play the blood-and-oil card. There’s no need of such pre-emption: America has no appetite for yet another excursion against yet another band of terrorists, and neither does anyone else.

That leaves the discouraging options of either providing Nigeria’s ineffectual government with material assistance, or pursuing the after-the-fact work of prosecuting crimes against humanity, both of them areas in which the dragging of feet will likely be in evidence. If that’s not a shame, it’s at the least a terrible, sad misfortune.