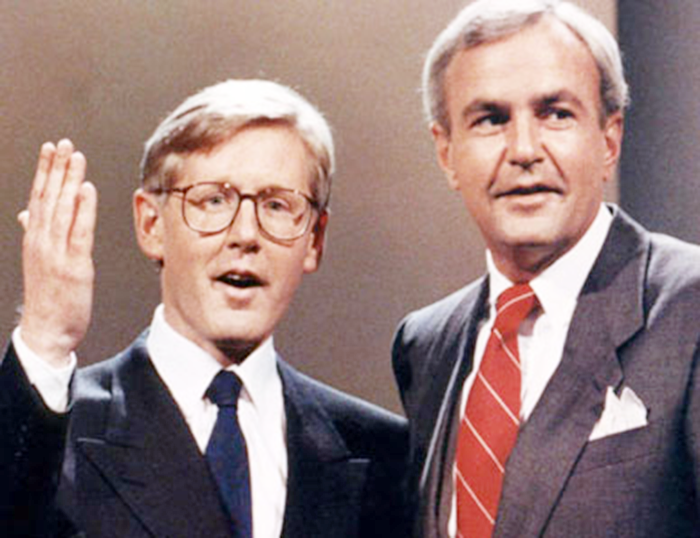 I CAN SUMMON with clarity the celebration of Fall 1990 that inducted the provincial NDP government of Bob Rae. I’d moved to Kingston a month earlier, at the end of August, and like everyone else was shocked to see that the NDP would not only form a government, but a majority government at that.

My concern here, however, is not with majorities but rather with what may now be, or in any case will soon be, a minority: those who are old enough to have voted for, and lived through, the days of Rae. These folks will have noticed the play in the previous sentence – on Rae Days – and they understand implicitly why the NDP, after exercising its brief majority, reverted to its natural role as the political third wheel.

According to one theory, whose origins I’ve long forgotten, the business of voting has undergone an evolutionary transmogrification. In earlier times, citizens voted for the candidates they liked the most. Soon, a cynicism having seeped into the civic fabric, they began to vote for the candidates they disliked the least. And now? People vote against the crooks and liars that they hate the most.

The problem with this theory is that it presumes a golden age, and no experienced person could reasonably indulge a notion like that. If you are old enough to have voted in the 1990 election, you’re old enough to know there’s nothing new under the sun. Back then, the Liberal party under the much loathed David Peterson was widely regarded as corrupt and arrogant and ripe for the boot. The problem was his uninspiring and unconvincing contenders – on the left the tax-and-spenders, and on the right a former teacher from North Bay whose only policy idea was tax cuts.

Eventually that wheel would turn, and both Peterson’s 1990 opponents would have their day, according to the voting principle summarized above. The problem of 2014, therefore, is the diminishing marginal utility of loathing presented by franchises the voters feel they’ve only just recently repudiated. Those who have lived through the Rae, Harris and McGuinty governments have no recourse but to choose which they’ll live through again, many having sworn “never again.”

This misery is compounded by the parties’ servings of magical thinking, the notions that you can spend your way to solvency or, conversely and just as improbably, cut your way to growth. Tim Hudak reheats 1994 as if oblivious to the fact Ontarians had their fill, thanks, and can still recall the indigestion. Kathleen Wynne, having failed to secure the support of Andrea Horwath, by means of budgetary bribery, is hoping we’ve forgotten not only the recent past but basic math as well.

In contrast to the voters, the leaders seem to have learned nothing from the past twenty years, except that it’s generally a good move to “go negative” in the hope that most will hate the other fellows more than they despise or mistrust you. That’s how Bob Rae became Premier in 1990, and it’s how Mike Harris succeeded him. Now, confronted by this election, I have to wonder if a further stage of voter evolution might be on the horizon – the stage at which all-of-the-above antipathy takes things in a new direction.