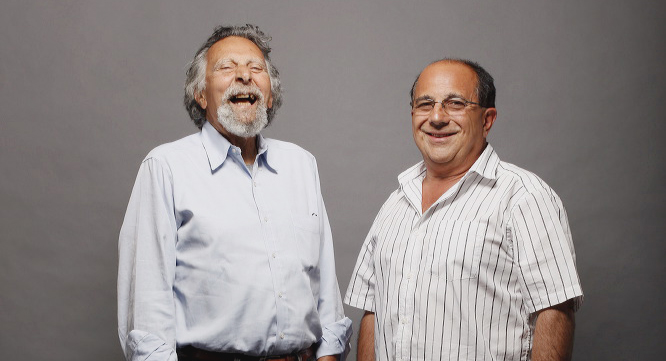 IT’S BEEN SO LONG now, I don’t remember exactly when I discovered Car Talk. But I know what got me hooked immediately, likely around twenty years ago: the infectious laugh of Tom Magliozzi. He and his brother Ray had already by then perfected their schtick—a couple self-deprecating shmucks, fumbling their way through a lousy radio show that brought embarrassment to the NPR management.

In every aspect, the fictions of Car Talk couldn’t have been further from the truth. “Click and Clack, the Tappet Brothers” held between them several post-graduate MIT degrees—Tom being by education a chemical engineer and economist. Dim they were not, as any listener could easily discern. Nor was their long-running program an embarrassment to National Public Radio: year upon year, from 1977 onward, its devout audience grew. Eventually, over three million listeners would tune in regularly on Saturday mornings (I was one of them) to listen to the Magliozzis’ award-winning program.

The charm of Car Talk reposed in the wit and humour of the hosts, and while the program was ostensibly about automobiles and automobile repair, the mainstay of the show was human relationships—especially of the male-female variety. “If a man speaks in the forest,” Tom once asked, “and there’s no woman there to hear him, is he still wrong?” This example suggests that the humour of Car Talk resembled the shopworn conventions of, say, vaudeville, and indeed I think the comparison is fair. There is nothing especially novel in observing the real, or in some cases imagined, differences between the sexes—but, then, if it ain’t broke, why fix it? It happens also that the automobile is a useful entrée into the subject. Whether by accident or design (and I truly don’t know which it was), the Magliozzis had an ideal formula for an engaging show. Part car repair advice, part relationship advice, the program moved effortlessly between the practical and philosophical worlds, without ever being tedious.

As for Tom Magliozzi, he was the drop-out who invented for himself a life and a career, almost without ever meaning to. All that he knew for certain was that, having been in the military, and having taught in the academy, he never wanted to have a proper haircut nor a job again. The story of his life is rehearsed in a book I read years ago but whose title I don’t recall. The point of the story is that Tom danced to his own drummer, and the beat was decidedly off-beat. He was one of those people who had to find his own way, on his own terms. Still, it must have taken a degree of courage to leave behind a secure and well-paying career—in pursuit of which he had spent years, earning his doctorate—in order to open, with his brother Ray, a do-it-yourself car repair business. The business did poorly, but it did yield a chance opportunity, in 1977, to participate in a Boston public radio automotive expert panel. This would mutate into the program so many of us now know and love.

I will always remember Tom Magliozzi as an authentic, self-directed individual. He was funny, and smart, and fun. But more to the point, he lived as if to demonstrate that fear of failure, convention, and the norms and expectations of society are nothing as against the determination of an individual who is committed to finding his own way in the world, in his own way.