It takes a village to rock. ✎ By Wayne K. Spear

This is a story about Mick and Keith.

Steve Jobs wasn’t interested in computer circuitry, and Steve Wozniak didn’t believe there was a market for the machines he was making in his computer club.

Elton John can write a decent melody. Bernie Taupin has written some of pop music’s best-known lyrics. The two met in 1967 through an audition that both failed. When they joined forces, they succeeded.

In the 1980s, Mick Jagger tried (unsuccessfully) to become a solo superstar. Keith Richards once said that, together, he and Ron Wood were the best guitarists. He added that he and Ron were average individually.

A rock band is a division of labor, a team, a small corporation, and an alchemy.

Many of the most successful rock bands have had four members. Many personality assessments are four-factor. You can plot many rock bands on a DiSC graph. 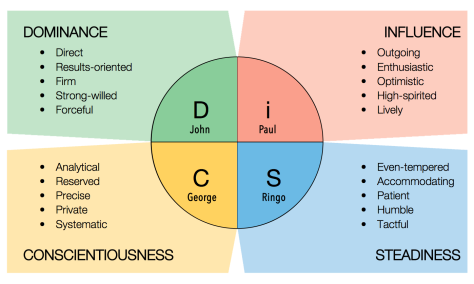 I’ve created several rock bands, and I’ve worked with many corporations. Whatever you’re doing, think of it as a team effort, because it is. The alchemy of personality and talent is not arbitrary or mysterious. It can be assessed and measured. I know this.

Even if you are a novelist, you need a good team behind you.

Who is supporting your success? Do you have mentors, collaborators, colleagues, partners, and role models?

The lesson of Mick, Steve, Elton, and Paul is that you can’t do it on your own.