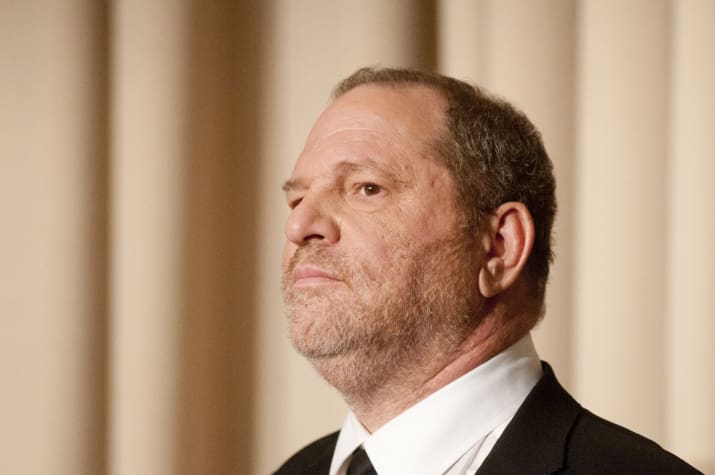 Liberal Hollywood? Nothing is more conservative than an industry built by powerful old men to exploit women.

IT’S ENCOURAGING TO SEE the stars burn with indignation this week, but the spectacle would be better had Harvey Weinstein’s creepy predations not been an open Hollywood secret and a punchline before they finally became a scandal. Tinseltown’s men are making the correct noises now, but they aren’t the ones who put the former into Weinstein’s updated CV, former film studio executive. That honor belongs to female actresses and two female reporters at the New York Times, Megan Twohey and Jodi Kantor, who one week ago exposed a man who for years made a habit of exposing himself. Good riddance, Harvey Weinstein, you pig. You were forever cajoling women to watch you take a bath, and you forever looked like you needed one.

Harvey Weinstein is the elephant in the room.

Just as you’d expect, the Trumpians have taken to this news like the wolves that they are. Harvey Weinstein! A Democratic donor! Supporter of Hillary and Obama! And Weinstein was a donor to, and supporter of, Democratic politicians and causes. For this reason his crimes have become a symbol in the minds of many for all that is rotten within liberalism and the left. Hollywood, a pit of leftist godless sexual iniquity and deviance. A land of anarchic carnal indulgences and hedonistic arrogance. How on earth do they get away with this disregard for family values? You’ve heard the saying. When you’re a star, they let you do it.

Harvey Weinstein is gone, at least for now, but his species is far from extinct. We’re certain to revisit the sordid genre of sex, liar, and audiotape because men have made sure that the institutions which shelter and abet the Weinsteins of our world remain intact. Weinstein survived his 2015 audiotape exposure, as did a certain high-profile political candidate, in 2016. Our world still has locker rooms and casting couches. There’s still an elephant in the room, and the elephant is wearing a bathrobe, and if you don’t give the elephant a massage you will never work in this town.

So much for Hollywood liberalism. The industry clings to and conserves the outdated and pernicious garbage of our past. “I came of age in the 60s and 70s,” Weinstein said, “when all the rules about behavior and workplaces were different. That was the culture then.” His self-defence is ridiculous, but it’s also revealing. Hollywood is a throwback to an earlier era, an essentially conservative institution where female employees are expected to indulge the whims of older men as a condition of advancement. The film critic Manohla Dargis puts it like this, in her article “Harvey Weinstein Is Gone. But Hollywood Still Has a Problem.”

Outsiders tend to see the industry as liberal, and while insiders do promote progressive causes, the business hews to a fundamental conservatism. This conservatism shapes its story recycling, its exploitation of women (and men) and its preservation of a male-dominated, racially homogeneous system. Despite pressure, including from the likes of Ava DuVernay and Lena Dunham, the industry resists change. Those in power don’t see an upside in ceding it.

Miramax won over the outside world with artful stories, but on the inside it was a toxic environment over which presided a manipulative sexual predator and rapist. For decades Weinstein prevailed against allegations of harassment, all the while honing his grotesque sexual predator playbook. (From the Twohey and Kantor Times article: “Working for Mr. Weinstein could mean getting him out of bed in the morning and doing ‘turndown duty’ late at night ….”) Weinstein ought to be a type of man consigned to the past, but he isn’t. Hollywood ought to be setting a better example, but it isn’t. It’s still an industry run by powerful men to exploit women, and there’s nothing progressive or liberal about that. On the contrary it’s conserving the very worst instincts of men, in the interests of money and power, and in that sense it’s deeply conservative. And only men can change it.

My face was an inch from the wall and I was shouting my lines as fast and loud as seemed possible. “Faster,” came the command. “LOUDER!” I sent a hand down my red, television power tie, took a deep breath, and shot my lines as if I’d just landed on the French coast and either had to repel the Germans with my words or die on this horrible beach. I would have gladly had death.

END_OF_DOCUMENT_TOKEN_TO_BE_REPLACED

I used to think my introversion was a cosmic practical joke ✎ By Wayne K. Spear

“Stand against the wall. Now shout your pitch—as loud and fast as you can. Louder. Faster. LOUDER. FASTER.”

I’ll never forget it. I was in North Hollywood, learning how to “do” television from Clint Arthur.

There were about ten of us in the class. A dentist to the stars, bloggers, fitness and beauty experts, a woman who describes herself as America’s favorite lesbian grandmother.

The first day we worked on our pitch, and the second and third we pitched—over and over and over—to daytime television producers across the US, ten hours a day, on Skype.

It was exhausting. But no way was I going to show weakness. I did what I was told, how I was told to do it.

It was a valuable experience, but still it felt ridiculous. And I knew exactly why.

Show business is filled with introverts. Comedians, musicians, motivational speakers—it’s amazing how many of them prefer silence and solitude. Introverts have conquered the world, time and again.

And afterward, they’ve gone home for some welcome peace and quiet.

I used to think my introversion was a cosmic practical joke. I’ve known for a long time that I want to leave my mark on the world—that I want to do something useful and meaningful that makes a difference. I’m driven. It’s what the Greeks called a “daimon”—an inner spirit that compels you to live your life a certain way.

But really I just want to stay at home and read a book. When I say I am an introvert, I mean I am extremely introverted.

I’ve also been on radio and television and on many stages, giving speeches or leading workshops or performing music and plays.

The truth is I couldn’t have done any of these things without reading and introspection and thinking and silence and solitude.

Introversion is another word for “we’re busy getting ready to take over the world.”

I HAVE A RULE that states I don’t write about sports or movie stars, but today I’m breaking that rule. It’s my website, so it’s my rules (broken). Hollywood keeps sticking their loud faces into my life, over and over, so I’m stealing Jennifer Lawrence from them and putting her on my website, for whatever meagre benefits I can gain. A few hundred people are going to land here now, totally by accident, and when they do I’ll be waiting with a big sign that says A-ha! But don’t leave right away, because this is a post about Jennifer Lawrence. Or to be more specific, it’s a post about all the things Jennifer Lawrence and I have in common. Yeah, it’s Jennifer Lawrence with a BONUS.